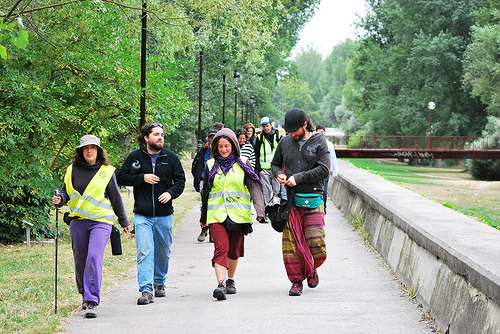 We travel on foot the more than 1,500 km separating Madrid and Brussels. We will stop in Paris on September 17 to support the different actions of our comrades around the world that day. On October 8 we will arrive at  Brussels, where an intensive week of protests and discussion forums will take place and culminate with the big global event planned for October 15.

The idea of the March arose simultaneously in several places in Europe, in accordance with the normal processes of collective intelligence, and was spurred by a shared sense of duty to continue the Movement of Popular Marches. The same day the several meetings that took place in the Retiro Park in Madrid received a visit from a Nobel laureate in economics, and the proposals collected on the first stages of the March of the Indignants were presented to the Congress, we decided to set on our journey.

During our passage through the towns and villages, we organize meetings, gather information about various local issues and hold discussions about possible solutions to bring them as proposals to the European Parliament.

We are ordinary people: construction workers, teachers, artists, students, travelers, unemployed workers, doctors, waiters, engineers, sociologists, psychologists, scientists and cooks. Many of us have participated on one of the marches from the various towns and villages to Madrid that gathered at the Puerta del Sol on Saturday, July 23.

Among us are people from different parts of Spain and the rest of the world, Germany, France, Poland, Italy, Holland, Russia, USA, Cuba, England, Mexico, Tunisia and other countries, with ideologies and views as varied as the societies in which we live.

Despite our differences, we believe that we all share the problems and difficulties for which we try to find solutions through the consensus method of the assemblies. We intend to improve the quality of life in our various localities in a horizontal and decentralized way. We do not represent any platform or association, and although we all identify with the 15-M Movement, we march as individuals.

Our main goal is to extend the methodology of 15-M to the global level by expanding our network and transmitting the experience gained during the last three months through an effective international coordination with other movements to forge a common framework for action.

We know that together we can succeed.

The Marchers of the Popular March from Madrid to Brussels

2 thoughts on “The march to Brussels: who are we, where are we going, why do we do it”