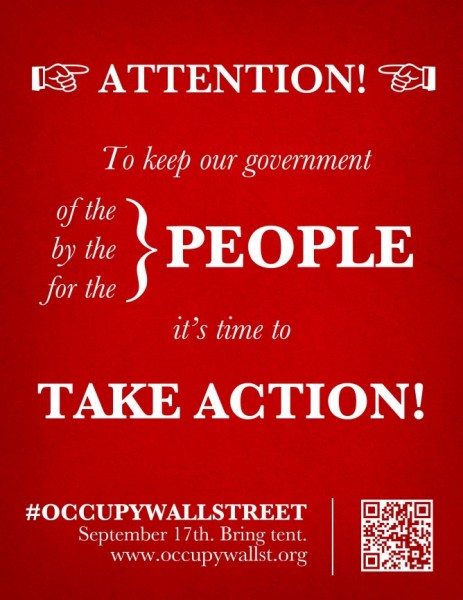 We are the citizens and non-citizens of the General Assembly of New YorkCity. We come from every walk of life, a variety of cultural, political, and religious backgrounds. Yet we share the same indignation for the common wealth that has been pillaged by the global institutions of finance with the complacency of the world’s governments—a looting that has led to massive unemployment, generalized cuts to public services, despair and resignation.
It is the same indignation that has prompted the people of Greece and Spain to occupy streets and squares on a permanent basis, the people of Egypt and Tunisia to overthrow their governments, the people of Iceland to nationalize their bank system and rewrite the constitution.

Over the past few weeks we have begun to share this indignation and listen to each other in a series of public meetings open to everyone. Freely inspired by the general assemblies that are mushrooming in every corner of the planet we have begun to bring our differences together through a consensual decision-making process. Such process does not aim at erasing differences. On the contrary it wants to multiply them so that we may begin to rebuild this nation and this world anew.

One of the first concrete steps we have decided to take is to *participate in a global day of action against financial capital on September 17, 2011.  We invite you to join us in this action by peacefully occupying the streets and squares surrounding the Wall Street area in New York City beginning on September 17. At the moment we do not have a specific list of demands. However, the Assembly initiated a conversation through which a number of proposals and perspectives unfolded.

Some of us think that the imposition of a Robin Hood Tax on all financial transactions, tax increases on capital gains, and the reinstatement of the Glass-Steagall Act are three essential measures to reestablish a minimum of fiscal sanity in the United States and abroad.

Some of us think that true autonomy and independence cannot be achieved through fiscal reform.

Some of us believe that we ought to reboot the system, rewrite the constitution, recuse a system of government employed by the rich for the
rich.

Many of us think that what truly matters at this stage is to create a shared framework which may enable everyone to speak out, be heard, co-evolve and advance with others. If you look through this framework you may not see one defined picture. If you walk through it you will be amazed at the strange world on the other side. It is time to take back our lives. We ask you to join us now in New York City or to start your own General Assembly in your own town.

In solidarity and struggle,