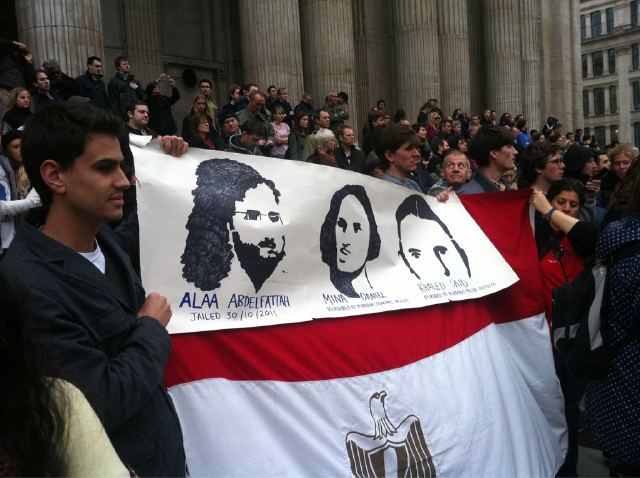 This call-out was written by Egyptian activists invovlved in ‘The Campaign to End Military Trials of Civilians’ and has been supported by various egyptian social movements and groups involved in the Revolution
A letter from Cairo to the Occupy/Decolonize movements & other solidarity movements.
After three decades of living under a dictatorship, Egyptians started a revolution demanding bread, freedom and social justice. After a nearly utopian occupation of Tahrir Square lasting eighteen days, we rid ourselves of Mubarak and began the second, harder, task of removing his apparatuses of power. Mubarak is gone, but the military regime lives on. So the revolution continues – building pressure, taking to the streets and claiming the right to control our lives and livelihoods against systems of repression that abused us for years. But now, seemingly so soon after its beginnings, the revolution is under attack.

We write this letter to tell you about what we are seeing, how we mean to stand against this crackdown, and to call for your solidarity with us.
The 25th and 28th of January, the 11th of February: you saw these days, lived these days with us on television. But we have battled through the 25th of February, the 9th of March, the 9th of April, the 15th of May, the 28th of June, the 23rd of July, the 1st of August, the 9th of September, the 9th of October. Again and again the army and the police have attacked us, beaten us, arrested us, killed us. And we have resisted, we have continued; some of these days we lost, others we won, but never without cost. Over a thousand gave their lives to remove Mubarak. Many more have joined them in death since. We go on so that their deaths will not be in vain. Names like Ali Maher (a 15 year old demonstrator killed by the army in Tahrir, 9th of April), Atef Yehia (shot in the head by security forces in a protest in solidarity with Palestine, 15th of May), Mina Danial (shot by the Army in a protest in front of Masepro, 9th of October). Mina Daniel, in death, suffers the perverse indignity of being on the military prosecutor’s list of the accused.
Moreover, since the military junta took power, at least 12,000 of us have been tried by military courts, unable to call witnesses and with limited access to lawyers. Minors are serving in adult prisons, death sentences have been handed down, torture runs rampant. Women demonstrators have been subjected to sexual assault in the form of “virginity tests” by the Army.
On October 9th, the Army massacred 28 of us at Maspero; they ran us over with tanks and shot us down in the street while manipulating state media to try and incite sectarian violence. The story has been censored. The military is investigating itself. They are systematically targeting those of us who speak out. This Sunday, our comrade and blogger Alaa Abd El Fattah was imprisoned on trumped-up charges. He spends another night in an unlit cell tonight.
All this from the military that supposedly will ensure a transition to democracy, that claimed to defend the revolution, and seemingly convinced many within Egypt and internationally that it was doing so. The official line has been one of ensuring “stability”, with empty assurances that the Army is only creating a proper environment for the upcoming elections. But even once a new parliament is elected, we will still live under a junta that holds legislative, executive, and judicial authority, with no guarantee that this will end. Those who challenge this scheme are harassed, arrested, and tortured; military trials of civilians are the primary tool of this repression. The prisons are full of casualties of this “transition”.
We now refuse to co-operate with military trials and prosecutions. We will not hand ourselves in, we will not submit ourselves to questioning. If they want us, they can take us from our homes and workplaces.
Nine months into our new military repression, we are still fighting for our revolution. We are marching, occupying, striking, shutting things down. And you, too, are marching, occupying, striking, shutting things down. We know from the outpouring of support we received in January that the world was watching us closely and even inspired by our revolution. We felt closer to you than ever before. And now, it’s your turn to inspire us as we watch the struggles of your movements. We marched to the US Embassy in Cairo to protest the violent eviction of the occupation in Oscar Grant Plaza in Oakland. Our strength is in our shared struggle. If they stifle our resistance, the 1% will win – in Cairo, New York, London, Rome – everywhere. But while the revolution lives our imaginations knows no bounds. We can still create a world worth living.
You can help us defend our revolution.
The G8, IMF and Gulf states are promising the regime loans of $35 billion. The US gives the Egyptian military $1.3 billion in aid every year. Governments the world over continue their long-term support and alliance with the military rulers of Egypt. The bullets they kill us with are made in America. The tear gas that burns from Oakland to Palestine is made in Wyoming. David Cameron’s first visit to post-revolutionary Egypt was to close a weapons deal. These are only a few examples. People’s lives, freedoms and futures must stop being trafficked for strategic assets. We must unite against governments who do not share their people’s interests.
We are calling on you to undertake solidarity actions to help us oppose this crackdown.
We are suggesting an International Day to Defend the Egyptian Revolution on Nov 12th under the slogan “Defend the Egyptian Revolution – End Military Trials for Civilians”
Events could include:
If you’re organising anything or wish to, email us at defendtherevolution@gmail.com. We would also love to see photos and videos from any events you organize.
The Campaign to End Military Trials of Civilians
The Free Alaa Campaign
Mosireen
Comrades from Cairo
for more information on the military trials in Egypt see  http://en.nomiltrials.com/