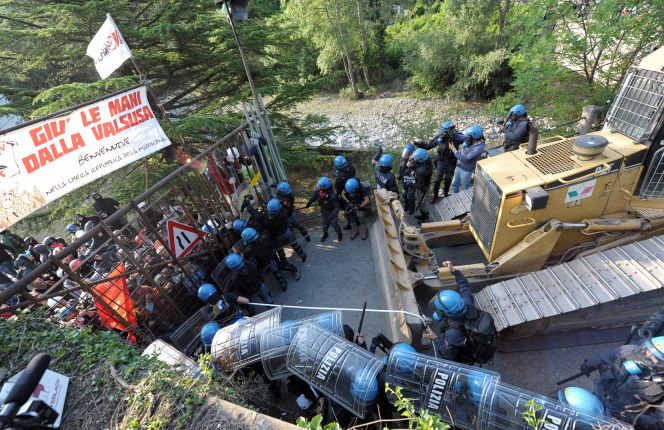 Yesterday in the early morning, a police operation was carried out in several Italian cities, against the NO TAV Movement. 26 activists were arrested and 15 are required to stay.
The arrests are linked to the events of July 3, 2011 at Chiomonte (Susa), when thousands of people joined a demonstration at the place where the Italian government intends to begin the construction of the High-Speed Rail (TAV, in Italian) Turin-Lyon.
That demonstration was held after the NO TAV garrison was violently evicted by Italian police, the previous week (June 27, 2011), when about 1,800 police officers fired tear gas against hundreds of protesters. In recent months, the police spent a disproportionate amount of  violence against following manifestations of the NO TAV movement.
Yesterday, the No Tav movement condemned all the arrests, which include a city councillor of a small town in the valley. Yesterday, about 8,000 people joined a demonstration in solidarity with arrested activists in Susa (the main town of the valley, which has only 5,000 inhabitants). Thousands have also demonstrated in Turin. A big NO TAV demonstration Is scheduled for Saturday, January 28 NO TAV in Turin.
The high-speed railway line (TAV, in Italian) Turin-Lyon, which has not been started to built yet, is the most expensive public project ever planned in Italy (at least it would coast 17  billion euros). Several  engineers and technical experts recognize it as essentially useless: on the same line, a railway already exists, although under-used. The No TAV Movement, which is active since the early ’90s, says that the infrastructure would  have a devastating impact on environment and public health in the Susa Valley, due to the massive construction that would last twenty years and probably more, and the presence of dangerous materials such as uranium and asbestos in the mountains where the megatunnel of 57 km between Italy and France would be built.
The  imposition of this pharaonic infrastructure, moreover in times of deep economic crisis, appears to fulfill only a speculative logic, good for some enterprises and economical lobbies, but negative for the whole community. For all these reasons, it is more than twenty years the “No TAV” Movement (which include a wide participation of the the Susa Valley population,  including several mayors, city councillors and local administrators) opposes the beginning  of infrastructure works with great determination.
The  movement defends not only the Susa Valley, but also the protection of common goods, against a project which is the symbol of the current development model, unfair and unsustainable.
Videos:
http://www.youtube.com/watch?v=CIOLkwf8GE8&feature=related
http://www.youtube.com/watch?v=Ku_RcFJlaPc&feature=related
http://www.youtube.com/watch?v=1k0MynG8LsY&feature=related
From: acampadabcninternacional.wordpress.com