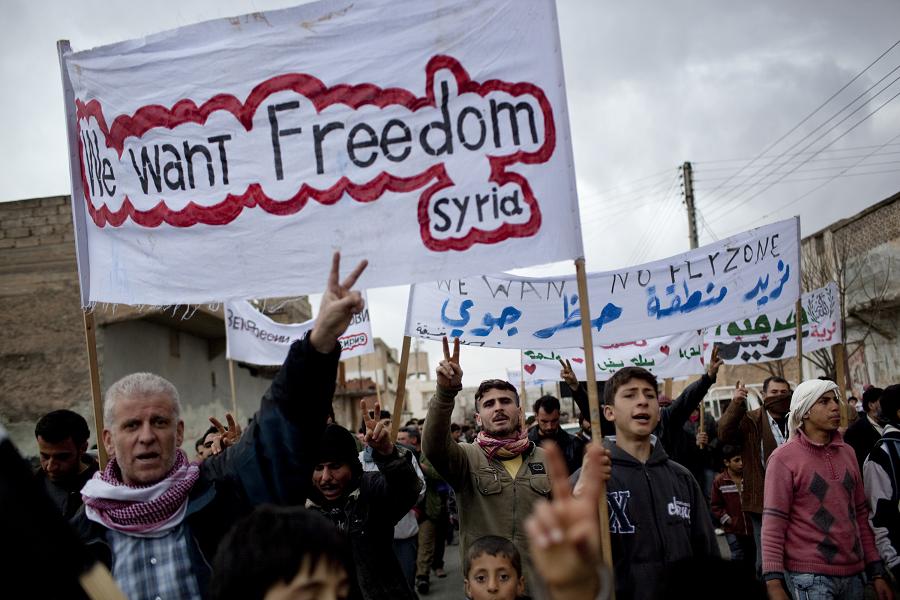 The conflict in Syria is giving way to a troubling phenomenon of hastily drawn sectarian lines throughout the Middle East. A perpetual and repugnant war is likely to replace the collective aspirations for equality, freedom and democracy that fuelled the non-violent uprising nearly 15 months ago.

Between May 25 and 26, 108 civilians were remorselessly butchered in the central town of Al Houla. The majority of them were women and children. The massacre was not the first, and is unlikely to be the last in what has become a Syrian bloodbath with no end in sight. The nature of the dreaded battle is already being defined in sectarian terms. Even carefully-worded statements by UN chief Ban Ki-moon have acknowledged the worrying situation. “The massacres of the sort seen last weekend could plunge Syria into a catastrophic civil war, a civil war from which the country would never recover,” he warned at a forum in Istanbul.

While intellectuals and political analysts may contend with definitions of ‘civil war’, ordinary Syrians have no other option but to recognise the horrifying reality. “The civil war has begun,” a Syrian activist told BBC correspondent, Paul Wood, who is reporting undercover in Syria. “We will look back at this time, and say this was when it started,” the activist reportedly said.

Then, it will matter little why the uprising started, or whether its leadership still possesses a truly democratic vision regarding the future of Syrian society post President Bashar Al Assad and his Baath regime. Even Syria’s class conflict is now being viewed through sectarian glasses. “Their sect [the Alawites] is full. Ours [the Sunnis] is hungry,” a Syrian woman told the BBC (May 31).

Throughout the Syrian uprising, it was the Syrian regime that was accused of desperately trying to redefine the conflict around sectarian lines. If it did so, now it is succeeding — not just in Syria, but throughout the region.

Equally worrisome is the fact that the fledgling civil war in Syria might possibly spill into neighboring Lebanon. This comes as no surprise considering the cultural, political and sectarian overlaps between both countries. Syria was, until recently, the main power broker in Lebanon — first as an arbitrator in the country’s protracted civil war, but eventually as a powerful party dominating the country’s political and civic lives. Some Lebanese groups welcomed the Syrian presence, while others considered it a form of foreign occupation and pushed to end it.

The bitterness continued, however, as did the accusation of various Lebanese groups, Hezbollah included, of conspiring with the Syrian government to ensure its continued influence in Lebanon. Now Hezbollah, once hailed for forcing Israel out of Lebanon, stands accused by the Syrian opposition of helping to crush the revolt in Syria. The tension reached an all-time high in Lebanon, when a Lebanese Sunni Islamist was arrested in the northern city of Tripoli for his involvement with a ‘terrorist organisation.’

“His supporters claimed he was being targeted for giving help to Syrian refugees by a security establishment believed to be under the influence of Hezbollah, the Lebanese Shia group that is allied with Damascus,” reported the Financial Times on May 23. That single act resulted in several days of demonstrations and sectarian clashes which killed at least eight people. Lebanese Sunni and Shiite groups both called on their supporters to use restraint. Influential Arab countries are now sounding the alarm as well. Saudi King Abdullah Bin Abdul Aziz reportedly wrote to Lebanese President Michel Sulaiman, expressing concern about sectarian strife and the “targeting of a main sect” (Financial Times, My 23); but to no avail. On Saturday, ten more Lebanese were killed in similar clashes in Tripoli. The “regional spillover” from a possible “all-out civil war” in Syria — as described by UN envoy Kofi Annan — is already in full effect.

With thousands of Syrian refugees crossing into Lebanon, reported weapon smuggling on both sides of the border, and the growing emphasis on the sectarian nature of the conflict, geopolitical boundaries between both countries will eventually prove irrelevant. The porous border may no longer be able to keep the conflict on one side only; in fact, most media discussions concerning Syria somehow evolve into ones concerning Hezbollah, Lebanon and Iran. References to Shia and Sunni are no longer being used with any particular sensitivity, paving the road for a complete polarisation of the conflict around sectarian lines.

The capture of Lebanese Shiite tourists by Syrian militants suggestive of the new direction of the raging conflict, but it could in fact also signal a larger conflict that could engulf the entire region. This is an urgent matter, especially since the sectarian conflict in Syria is now at an advanced stage, and neighboring countries — Iraq, Lebanon, and even Turkey — have all suffered the terrible consequences. In the case of Iraq, the rift was exploited to the absolute maximum in the years following the US invasion in 2003. In the case of Syria, there are some parties — starting with Israel — who wish to see that prospect take roots.

Aside from the fact that sectarian conflicts are senseless and revenge-driven, in the case of Syria they could divide the country around new political borders. Unlike Syrian resistance to French colonialism in the early 20th century, each party in a divided Syria would seek foreign intervention – read neocolonialism – out of despair to defeat its opponents. In a conflict of this nature, there are no winners.

“Many [Free Syrian Army] FSA volunteers have told me they are fighting for a secular and open democracy,” reported Paul Wood. “But others have said they want to kill Alawites and Shias [Shiites], ‘Just those with blood on their hands.’”

This is how civil wars often start, but no one knows how they end.