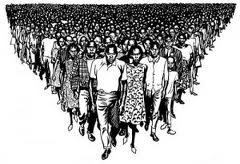 March of the Outraged: Press Release#marchaindignada

A proposal for a non-violent and peaceful march in the democratic, constructive and inclusive spirit of the 15th May Movement.

Marchers from cities around the country will make their way by foot to Madrid, the political centre of Spain, during the months of June and July. So far groups in the following cities have confirmed their participation: Santiago de Compostela, Cadiz, Murcia, Valencia, Barcelona, Logroño, Málaga and Granada. The marches are expected to take place in the four weeks preceding their arrival in Madrid on 23rd July.

The participants in this march for dignity and change will hold assemblies in every town and neighbourhood along their way. These assemblies, designed as meeting points for the exchange of ideas and viewpoints, will address the concerns, demands, experiences and struggles of the people, all the people.

All of this will be compiled into a book, establishing an ongoing dialogue between protest camps, cities, towns, neighbourhoods and individuals, aimed at building a more just society with room for everyone. These paths are charted in the humility that is learnt by walking, listening and talking. We know that the social transformation needed to create a better world involves a long learning process. In other words, the road ahead is long, but long roads are measured by short steps, and that is the purpose of this march. From outrage to active listening, our actions will strive to build new forms of participation, towards social, democratic and peaceful transformations.

A blog is now in place where we’ll be updating all the information about the march starting dates and routes. All the marchers will have similar needs: food, back-up vehicles, tents, first-aid kits and other material resources. But above all they will need human support: people who want to help out by setting up their tents, preparing meals, actively working together and, of course, sharing ideas. Anyone wishing to lend a hand should contact the march coordinators at the e-mail addresses provided on the website: http://marchapopularindignada.wordpress.com/

The assemblies will continue to be our space for political expression. Their legitimacy is rooted in the people’s participation. Social transformation depends not on governments or on who governs, but on citizens and their needs.

2 thoughts on “The March of the Outraged will arrive in Madrid on 23rd July from over 20 cities.”