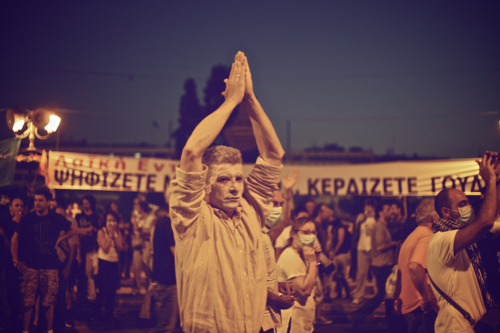 Originally published by our parters of RoarMag.org

European democracy is dead. It was executed in plain daylight on June 29, by a lone hitman thought to be in service of the European financial mafia.

Last week, European democracy went to die in Europe’s lonely southeastern corner, in the same very place where it was born over two-and-a-half thousand years ago: in the streets of Athens.

There, in the blistering sun and under the troubled gaze of the Acropolis, it drew its last breath in a haze of teargas, after having been badly beaten by a corrupted and unaccountable police force.

Determined cause of death: suffocation by draconian austerity measures ordered by a powerful global crime syndicate and enforced by a local hitman by the name of George Papandreou, nicknamed the ‘Prime Minister’. 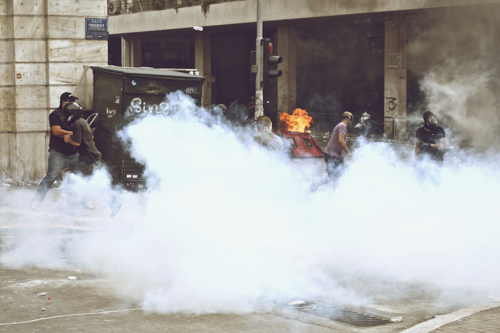 Not that European democracy had been bestowed a very healthy and long life anyway: it had been riddled with the cancerous disease of apathy throughout.

For years, Europe’s brainless elite has been euphemistically refering to its own lack of popular legitimacy as a “democratic deficit,” which is pretty much the same as calling yourself ‘undemocratic’.

But at least up until last week, the undemocratic Brussels technocracy could still be differentiated from the brutal dictatorships of the Arab world by the lack of violent repression and the presence of material wealth.

All of that changed last Wednesday, after the violent repression of peaceful demonstrations in Athens and the effective abolition of Greek national sovereignty and material wealth following the passage in Parliament of a second round of EU/IMF-imposed austerity measures. 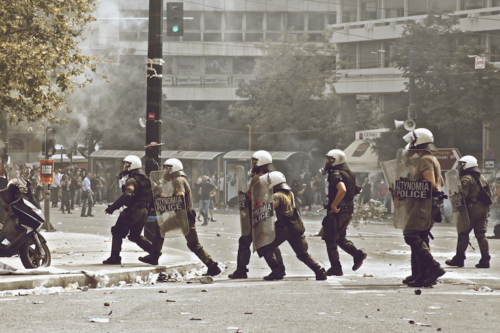 We now know that dictatorship lures on Europe’s southern shores. Indeed, Greek deputy prime minister Theodoroas Pangalos warned that if the austerity memorandum did not get through Parliament, the government would be forced to send tanks out into the streets of Athens to protect the banks. Libya is closer to home than many of us like to think.

In today’s ‘post-political‘ Europe, democratic politics has been all but eliminated. A European-wide free market is administered by a small club of experts and technocrats in Brussels and Frankfurt, none of whom have a democratic mandate, and none of whom answer to the people who are affected by the consequences of their decisions.

So it’s not a surprise to see a broad alliance of citizens and intellectuals sounding the alarm bell. Amartya Sen, the Nobel Prize-winning Harvard economist recently issued a dire warning in the Guardian, saying that “it isn’t just the euro,” but “Europe’s democracy itself is at stake.” According to Sen:

There are profound issues to be faced about how Europe’s democratic governance could be undermined by the hugely heightened role of financial institutions and rating agencies, which now lord it freely over parts of Europe’s political terrain. 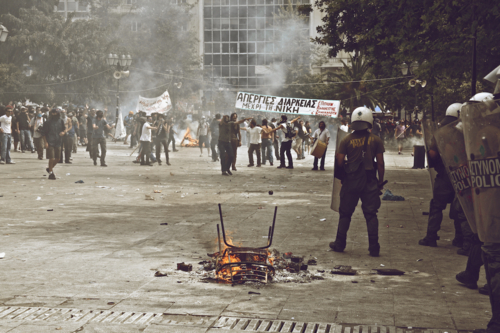 One of the most terrifying features of this financial dictatorship, is that it continuously seeks to legitimize itself by claiming that “there is no alternative.” These famous words by Margaret Thatcher are now being repeated ad nauseam by Europe’s technocratic elite.

Somehow, our leaders would have us believe that this crisis is like a natural disaster: there is no need for political debate — we just need to act. Since the experts already have the right plans in place (structural reform, austerity), all we need to do is follow their advise and stop asking difficult questions.

Christine Lagarde, the former French finance minister and incoming head of the IMF, put it in very clear terms when she called on the Greek opposition to unite behind the government’s austerity plans, stressing that “right now it’s time to put aside small or large political differences.” 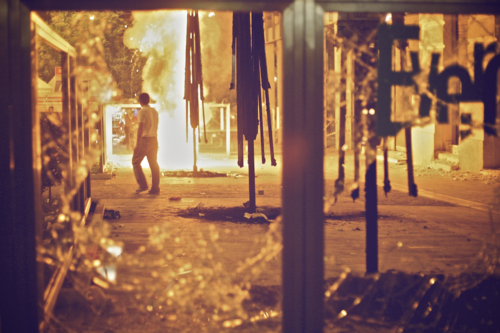 Lagarde’s attempt to quell political debate in the name of financial expediency is emblematic of the economistic mindset of neoliberal Europe. As Havard economist Dani Rodrik recently observed, “economists who denigrate the value of democracy sometimes talk as if the alternative to democratic governance is decision-making by high-minded Platonic philosopher-kings – ideally economists!”

But the ‘naturalization’ of the crisis by these omnipotent economist-kings is itself a profoundly political act. It’s the ultimate conversation-stopper: we are facing a disaster, and only austerity will stave off catastrophe. So basically, if you don’t support our political ideas about how to solve this crisis, you will lead us to disaster. In other words: resistance is futile — you will be assimilated. 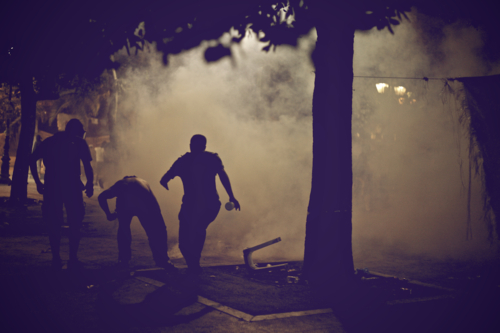 The truth is that it’s only by eliminating ‘petty politics’ that the elite can maintain its grip on power. Since 70-80 percent of Greeks are said to be opposed to austerity, allowing democracy to run its course would logically lead to a Greek default. A Greek default, in turn, would seriously harm the interests of the European financial sector.

This is exactly why Eurozone President Juncker told the German tabloid Focus that ”the sovereignty of Greece will be massively limited.” In the undemocratic EU, nation states still remain the principal bearers of democratic legitimacy. For the financial sector, the nation state has therefore become an obstacle. That’s why it has to go.

Once upon a time we had a fancy word for a foreign policy that seeks to further domestic economic interests at the expense of other people’s sovereignty. We used to call it colonialism. Today, we are seeing its violent return and its assault on hard-won democratic rights across the continent.

This makes the struggle of the indignants at Syntagma all the more relevant. While the populists in the North continue to exalt their near-racist disdain of the Greek people, we have to realize that they are on the front-line of a global battle to save European democracy from the rapacious claws of the financial mafia and its political accomplices.

They may smile and speak eloquently. They may talk about ‘national responsibility’ and ‘averting disaster’. But in reality, they are invading a country, killing democracy and waging war on a people. If we tolerate this, then our children will be next.