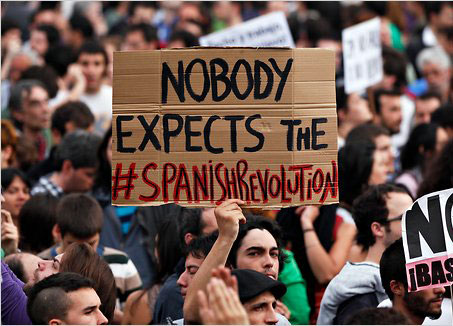 A friend told me that the Greek historian Herodotus summarized his method in the following way: “I write down everything I don’t understand.” That is to say, Herodotus took note of what remained to be thought about, he wrote it down so it wouldn’t get lost. In these “notes from the camp” I have proposed to do the same, to take note of what I don’t understand: the details, the scenes, the situations at acampadasol which ask questions of me. But also of the things which amaze me about what is happening and that I feel resonate in this new thinking+sensitivity about the political which some friends and I have been exploring since March 11th, 2004. I can only link myself with what is happening through this fragmentary writing, the notes jotted down in the notebook I always carry.

A friend says to me, “Now its not a matter of taking the streets, it’s a matter of creating the square.” She says this as if she’s pointing out a decisive difference. We have to understand it.

What do we have in common, those of us who are in the square? Not a specific demand, more like the sharing of a problem. The problem is representation. We didn’t want the Sinde Law [against downloading of copyrighted material] and, yet, the politicians imposed it. We don’t want those who have the least to pay for the crisis, but this is what is happening. People should rule, representation should be representative. That is why “They call it democracy but it’s not” and “they don’t represent us” and are the two hit slogans here. Beyond that, an abyss. I wander around Sol and see three posters in a row: “Self-management”, “Reform the electoral laws”, “We don’t want corrupt politicians, we want efficient managers”.

Another friend: “It’s like everyone is in love, look what smiles.”

From the first day I was very impressed with the seriousness which runs throughout the camp, the extremely high degree of maturity and organization. There is abundant food and coffee (much of this donated by neighbors from Madrid). Cleaning is done with care and we are continually reminded that “this is not a party.” On Thursday there were a couple of play areas for children with cardboard floors and lots of kids playing and painting. In the groups and the commissions which are meeting all over the place there are astonishing levels of listening, as if it were clear to all that it is less important what each one brings with him or her than what we can create together. “Here a person can live!” says someone near me. The collective effort to take care of the space builds during a few days a little habitable world with room for all of us. It is what I read about Tahrir a few months ago.

It seems that in the plaza in the center of Sol, where the working-groups operate, money is not accepted. Any collaboration or donation is welcome, but not money. Is this an effort to ward off any possibility of corruption? It might be, the movement knows very well that its strength depends on radically distancing itself from anything related to shamed politics.

“The democracy we want is already the organization of the square itself.”

Blessed be those who decided not to budge from Sol after the demonstration. I thought it was planned by those who called for the demonstration, but I’ve learned that that was not so. I think a lot about this gesture. It is one of those incredible gestures that make things happen against all predictions. I received a text message with the news at one o’clock in the morning and didn’t pay any attention. “It won’t work,” I thought. I should have a look at this cynicism. Because it is ingenuity which changes things.

Debate with an activist friend. He says the language being used irritates him. He finds it very poor: “democracy,” “citizenship,” etc. I argue with him: ever since “no to the war,” it has been these kinds of “flat” statements which open up spaces in which we all fit, in which things really move. It’s true that I think “you’re not going to have a house in your whole fucking life” is a stronger slogan that “we are not commodities in the hands of politicians and bankers.” But today it seems clear that words are powerful not so much for what they say as for who says them and from where.

“Without housing there’s no living.”

All the time I have this intense interior sensation: I have already lived some part of this. In the “no to the war”, on March 13th, in “V de Vivienda”… There are many, many resonances: all were movements which didn’t find their strength in an ideology or a program but rather a first person involvement which doesn’t make sense in the left/right dichotomy, but rather tries to escape from it in order to interpelate everyone, anyone. They base their strength precisely in the creation of a “we” which is open and inclusive, which doesn’t announce another world possible but which becomes active in order that this world which does exist and which we share doesn’t come undone… It seems clear to me that May 15th has to do with V de Vivienda, March 13th, the “no to the war” but… how? What does it pick up from those? What new things does it propose that we think about? What does all this mean for the future?

Stereotypes are a strategy for governing. They put a label on those who protest (“anti-system”, for example) and that way separates them from the rest, as if they had nothing in common. The movement is very intelligent about this: “we are not anti-system, the system is anti-us.” Fantastic.

Everything which is divisive remains outside the square: from big organizations to violence.

A friend summarizes the situation like this: “Democracy 2.0 has killed the Culture of the Transition.”

– i still have the sense, kind of old fashioned, that twitter is not what happens but a way of telling about what happens

– or, in other words, tw is only interesting in composition with something else

– the plus of the potency of bodies