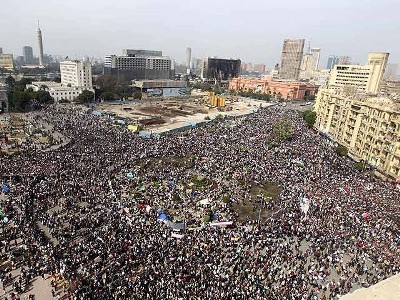 The news from yesterday’s alliance of 12 parties with the Muslim Brotherhood for a unified election front and a single candidate list came as a surprise to many, since the alliance included parties such as Masr Al Horreyah and AlAdl party. Masr AlHorreyah came as a surprise – or in hindsight maybe it shouldn’t have- because it’s Amr Hamzawy again jumping out of alliances and into other ones as if it’s not hurting his image or credibility. Just so we can keep track, Hamzawy was slated to join the Free Egyptian Party, then decided not to and joined the Egyptian Social Democrat party, and then leaving that and creating the Masr AlHorreyah party (which really doesn’t have enough members to qualify legally as a party), and in turn joined an alliance of liberal parties with the FEP, ESDP and the DFP, which it abandoned yesterday when it went and created an alliance with the MB. But since one expected the parties to join the alliance with the MB to be the old weak parties that were known to strike deals with the NDP to allow them to win a seat or two, and therefore ones that couldn’t win without the MB support anyway, like Eltagamo3 and ElWafd, it shouldn’t come as a surprise that a party like Masr AlHorreyah joined up, since it neither has the street presence or the support that would allow them to win a single seat anywhere. The only reason why I am sad to see this is due to my knowledge that some really good and decent individuals are members of that party, and yet somehow agreed to tie themselves to a political albatross such as Amr Hamzawy. He is the only known name in the party, and is also their biggest liability. Badness all around.

AlAdl came as a surprise because it’s one of the few parties that knows what it wants, and can get it without anyone’s help. Chances are that they can get the 10% that they want in Parliament without a problem, and thus don’t require the MB’s assistance like the other 11 clowns do. However, the parties are claiming that they creating a national unity coalition, and as the party positioning itself as the centrist party in the Egyptian political landscape, it has to join such a coalition. On the plus side, it could also save them unnecessary hassle come elections time, not having to go in direct election battle with the MB. It’s political pragmatism at its best, and it comes from a position of power, unlike the other parties. However, whether the AlAdl members would like such an alliance remains to be seen, since a lot of its core members are the religiously moderate Egyptians, the type of people who view religion as an important part of their lives, but don’t want whatever the MB is selling. This could get risky.

The Problem with such an alliance is twofold. The first one is that it gives the MB too much power and influence over the next elections, providing them with 3 possible scenarios , all of them good for their purposes: Scenario 1: If the parties trust them, and they choose to betray the parties like they did in 2005 with tagamo3 and Alwafd, then they singlehandedly could eliminate all those parties from the next parliament and have more say on the constitution than anyone feels comfortable with; Scenario 2: If the parties trust them, and they deliver voter support, then those parties now become dependent on MB support, which means the MB will effectively control them to do their bidding if they wish to get re-elected again; and Scenario 3: The MB delivers on its support, and the other parties betray them once they are in power, then the MB will play the victim card to the max, talking about how the liberal and socialist parties can’t be trusted, and how they are the only true patriots because they gave up on more power in exchange of having a national unity parliament with all the political forces, which would erase the fact that they have literally betrayed the secular forces of the revolution like 5 times now. Just like the ill-fated alliance with the left in 2005, this is squarely in the best interest of the MB, and it’s rumored to have only happened because the SCAF told them they must do it, because the West is getting mighty uncomfortable with how Egypt is looking like now. Must keep up appearances of a diverse budding democracy, because the world wants a happy ending for that Egyptian Revolution story, and if the Islamists take over, we won’t get no funding or weapons. The Turkey Model must be adopted at all costs.

The Second Problem with this alliance is its intentions: The parties involved just want to divide the electoral map of Egypt, and divvy up the seats they will win from before the elections by having the other parties not compete on them and quite possibly having their people voting for the party running in that district. If this sounds like a good idea to you, then you obviously don’t understand democracy: Democracy is about giving people a choice. Multiple choices in fact. Competing visions and programs. If this Alliance happens in this intended way, with everyone cutting their piece of the parliament pie upfront, why even have an election? What about letting people choose their representative from the best of a competing pool instead of telling them “This is the national Unity candidate. Vote for him or we won’t have a national unity government. Don’t you want us united?” by creating such an alliance? Plus, Competition will allow us an elimination process that will finally declare the death certificate for some parties that have been effectively dead for years, and have no street presence or constituency and are nothing but a brand now, like ElTagamo3 or AlWafd. Those parties have survived by accepting whatever crumbs the NDP agreed to give them, and cartoonishly played the part of “the opposition” for years, and now is their time to die, or at least have a serious wake-up call. Such an alliance would negate all of that.

There is also the problem with execution of said power-sharing arrangement: How to divide up the seats? Will it be based on ability? Ideas? Presence? Historical weight? Ideology? How? There are 13 players in such an alliance, and if- god forbid- the other parties (The FEP, The ESDP, The DFP, and the Populous Alliance) also joined, you will have 17 parties and 444 seats. We know that the MB wants 30-50%, The FEP wants the same if not more, AlAdl is sticking to its 10% goal, AlWafd demanded at the meeting that they get 60 seats alone, which is 12%, so if both MB and FEP both agree on 30% each, that’s 60%, you add the requirements of AlAdl and Alwafd, and you have 82% of the seats. That’s 18% for the remaining 13 parties, and neither one of those 4 players will agree to any less of those percentages, and none of them represent the left. Can you imagine the in-fighting that will happen? Can you see how easily such an alliance wouldn’t work?

The concept behind an election is that there are a limited of seats in any parliament, so it’s up for the parties to represent their ideas and create ground operations that allow them to get as many seats as they possibly can in a free and fair competition. This alliance doesn’t want that. It wants a selection, not an election, and to rob the people from having a clear choice between parties, which is the exact opposite of what this revolution aimed to achieve. They can call it a National Unity government, a United electoral list, whatever, it’s still designed to rob the people from having any real say on who in the parties gets to represent them locally, unless it’s an independent candidate, and very few of those who aren’t NDP actually have a prayer in hell ‘s chance for winning such an election. It’s a bad idea anyway you spin it, and I am glad that the other 4 parties are not joining and I hope they stay this way. My only condolence is that such an alliance between leftists, liberals, centrists, opportunists and cartoonish parties wouldn’t last for long without crumbling under the weight of its infighting anyway. God knows that every decent person in Masr ElHorreya- except for Hmazawy of course- has been on the defensive ever since that meeting, stating that “no agreement has been formalized” and “we are simply just talking” to their enraged members, fans and friends. This will only get worse the longer this lasts. Just watch.