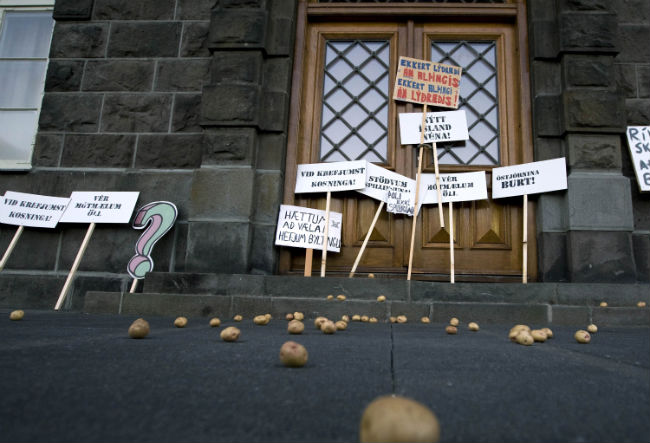 First every Saturday and later daily, Icelanders protested against their government in front of the Parliament building. (Brynjar Gauti/AP)

The biggest volcanic island in the world started its mutation towards huge laboratory in the nineties. The 103,000 square kilometers on the edge of the North Pole offered excellent conditions to experiment with wild capitalism. Iceland gradually lost interest on its fish, its sheep and its horses, and set itself onto the conquest of international markets. The “vikings” were taking the world by storm. They bought everything. They grew endlessly. And soon they could boast about owning half of Denmark, a country that had once dominated them and from whom they could not become independent until 1944. Practice seemed to confirm for a while the thesis of a new generation of Icelandic politicians, among which were David Oddson and Geir Haarde. Yes, it was possible to turn this traditional and remote territory, birthplace of the sagas, into the richest State in the world. In the United Nations rankings, Iceland ousted Norway as the best place to live in the world. “Flat-screen TV’s and Range Rovers became the symbols of the pre-crash era”, Silja Bára Ómarsdóttir, political scientist from the University of Reykjavik, explains.

In the “post-crash” era, Iceland gets a taste of getting out of the crisis. Activity continues in the biggest volcanic laboratory on Earth. What happens when wild capitalism fails? Can a currency recover after having lost almost 70 percent of its value in just one year? How does a society that didn’t know employment shortage face a 10 percent unemployment rate? And the key question: How long does it take to get into shape a State in debt for 200 percent of its GDP.

“God save Iceland”. Little more is remembered about the speech Geir Haarde, then prime minister, pronounced on October 6th 2008. There’s no need either. The phrase is an accurate sum up¿?. In their frenetic expansion, the country’s three biggest banks had not been too careful. When the international economy entered recession, the house of cards built by the insatiable vikings fell apart. The government had to step in. And the country on the limits of the North Pole ended up doing a balancing act on the verge of bankruptcy.

In 1973, Icelanders confronted Great Britain under the slogan “God save the cod”. Today the motto reads “God save Iceland” (AP)

But a viking doesn’t give up so easily. “It might sound like a nationalist cliché, but we are a people that if we fall, we get back up. Maybe that mentality is a consequence of the climate we live in. Or of the fishing culture: if you haven’t fished today, you go out again tomorrow”, Bára Ómarsdóttir explains.

Fish are interesting again in Iceland. And sheep and horses. Since the collective impact of October 6th, the island is going back to its roots. “Now more local produce is being consumed. Traveling inside the country has gotten back the popularity lost during the boom, when Icelanders vacationed abroad several times a year. Before people remodeled their homes completely like it was nothing, today people recycle and reuse more and second hand clothes are being worn again”, the Icelander describes.

“We are living a time of big changes in Iceland”, Bára Ómarsdóttir comments, and she is not only referring to the fact that people now mend the socks they used to throw away. What has been set in motion in the island is a true revolution: the “cooking pot revolution”, they call it, because armed with them the citizens went out to make noise in front of the Reykjavik parliament until in January 2009 Haarde’s government fell. Protests like these had not been seen in 60 years, when the country became a founding member of NATO against the population’s will.

The prime minister’s resignation –sick of cancer- and the punishment of his Independence Party in the later advanced elections were not enough, however, to appease the anger of the Icelanders. David Oddson, Haarde’s predecessor who went from head of the Executive to head of the World Bank with the correspondent and ignored conflict of interests, had to leave his office. In April 2010, a Parliamentary Investigation arrived to the conclusion that both of them, like other high-ranking officials, had favored with their negligence the financial collapse. Haarde will have to take responsibility in a court of law.

Iceland is trying to start over. Get back the values that got away through the gates opened by money. Rearrange the priorities: in daily life and also in politics. Now the Icelanders don’t only remember their fish, but also that their Althing is one of the oldest parliaments in the world. In this Assembly got together the goði, the chiefs of the clans previous to the introduction of Christianity, since 930. Always in absolute equality.

Potatoes and protest signs at the doors of the Althing, one of the oldest Parliaments in the world. (Brynjar Gunnarsson/AP)

“The principle that we are of equal is part of our national identity. No one, regardless of their position, has a right to usurp power”, Bára Ómarsdóttir asserts. 1,200 island citizens were chosen at random in 2009 to take part in a “national encounter” along with organizations, pressure groups and politicians and debate -all of them on an equal level- over the options for the country’s future. Now, 25 common citizens -and no politicians- try to include in the Constitution the proposals made in that meeting.

Silja Bára Ómarsdóttir sits in the new constituent assembly. “Of course it is an honor to have been selected”, she admits. The only requirements: being over 18 and having more than 30 support signatures.

“We are still not too sure about that changes we are going to make in the Constitution: if we are going to rewrite all of it or if we are going to modify some parts. We have just started working and we are still familiarizing ourselves with the national encounter ideas”, the political scientist tells. “The truth is, the task of reforming the Constitution was due since our independence in 1944. Now a series of factors have converged and made it possible and I hope that, at the end of the process, we will have been able to give more room to subjects such as the fact that the power emanates from the nation, the humanist values and the environmental subjects”.

With a population of 320,000 people, in Iceland last names are almost unnecessary. But size is not relevant when it comes to set into motion a participatory democracy, Bára Ómarsdóttir thinks: “any country can choose a group of people to draw up a Constitution. Here there were also people against doing things this way, but in the end they could not impose themselves, and I’m glad”.

The first referendum about the refund of the debt to Great Britain and the Netherlands took place on March 6th, 2010. The second one, on April 10th 2011. In both of them won the “no”. (Brynjar Gauti/AP)

Size doesn’t seem to be crucial either on another battlefront: the Icelanders refuse in an impertinent way to be the ones to pay for the debt their banks had with British and Dutch clients, and that the broke entities cannot pay back anymore. London and The Hague temporarily assumed their citizens’ compensation, and now they demand from Reykjavik 3,800 million Euros. An agreement between the three countries -approved by the Icelandic government and Parliament- planned the refund of the money in a 15 year period at a 5.55% interest rate. But the President of the Republic imposed his veto, and the Icelanders voted “no” in a referendum twice, the last one on April 10th.

The payment would increase even more the Icelandic debt and it would call back to the ghost of bankruptcy. But it’s not refunding the money what sparks off popular opposition, it’s the terms of the agreement. Meanwhile there are rumors that an improved version of the document could go around, but already from the first rejection at the polls the system fell upon Iceland with all its force: the international loans granted to the country as support for the economic crisis were suspended, the application to join the European Union called into question.

Joining the EU does not worry Icelanders too much. During the past Spanish presidency it became clear that the conflict with Great Britain and the Netherlands goes on away from the access contacts. And, anyway, the idea of belonging to the Community club and having to abide by its fishing norms is hardly attractive in these latitudes.

It could be more dangerous if the combative citizens had to learn that the market’s forces are too powerful for a single volcanic island, even if it is the biggest one in the world. In the end, directly or indirectly, they are going to end up paying for their banks’ extremely expensive broken china, believes Bára Ómarsdóttir. “That is why I would have preferred a negotiated solution from the beginning”, she says. But, what kind of avenging and poised Vikings would those have been?