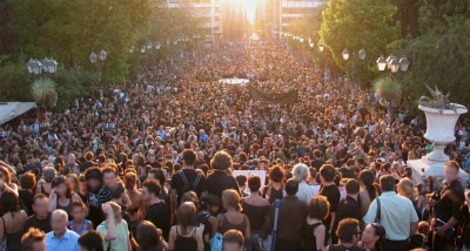 To the Mayor of Athens:

After a proposition of the thematic assembly of Direct Democracy, the People’s Assembly of Syntagma answers once more to the Mayor of Athens Mr Kaminis, regarding his statements, his intentions and all comments in the press that refer to a plan of “evacuation” of the square. The announcement is the following:

Following a government order, you have stated that you are going to empty Syntagma square, undertaking thus, the task of executing an unconstitutional act since in our Constitution the article 11 protects categorically the right of the citizens to gather and assemble. We remind to you that the public spaces belong to the citizens.

For 45 days the citizens of Athens, the city of which you are the mayor, are gathering and protesting peacefully at public spaces and squares. We fight for justice and dignity and we deny obedience to unconstitutional and unjust laws and memoranda that literally destroy our lives.

For 45 days now the people’s assemblies implementing democracy in action have caused worldwide interest, and touristic interest on top of that. Yet for 45 days now you ignore us, openly. Instead of taking your place with us in the movement of Syntagma square, you rush to comply with the governments orders against us. Still you claim, falsely, knowingly, that for any tourist cancellations and wilting of the commercial center of the city, those to blame are the “indignant”! But you know (only too well) that thousands who have passed by, are passing by, or stay at Syntagma, Greeks and foreigners, but not only do not decrease on the contrary, they reinforce tourism and commercial activity.

You said nothing about the attack of hordes of DIAS against shops at Ermou, and the acts of violence even against tourists. You took no position against the violence of the forces of repression acted on the citizens of your city and you refused even to discuss the issue during the city council meeting. Not a word on the disasters caused by repression and the government’s MAT forces to the public space of the city and the Syntagma square in special. Nor about the thousands of chemicals that the praetorians of Mr. Papoutsis has spread at the expense of health and safety of the Athenians.

You have not proceeded to a single intervention to prevent the uncontrollable police violence that resulted in hundreds of injuries. It was out of luck and our solidarity that we had in the end of the day no dead people. You said nothing about the organized by the police plan of promoting drug addicted people towards Syntagma square. If some homeless or drug addicted find refuge there it is because nobody hunts them down. If their presence insults your aesthetics we remind you that they are the victims of the callous state and municipal politics, for which you are also responsible. Instead of chasing them therefore from street to street and square after square, it is your duty to resolve their problems, give them hope, find them refuge and provide them with medical care, so they can go regaining their lost dignity.

Let us not forget, that the majority of those in tents in Syntagma is composed by people who left their homes and their lives, to materialize in action the square slogan “We will not go unless they leave”.. It is these decisive people that the current status of power fears and insults. Mr Kaminis When the citizens were in danger you were conspicuous by your absence. Those critical days and hours Athens had no Mayor…

Let aside thus the pretexts and admit that you have an order to collaborate to the plan of dissolving the people’s assemblies. Will you comply to the suggestions of a violent and unjust government that you serve willingly till today, and finally turn openly against the citizens of your city? Will you instead of Mayor and People’s Advocate, abject to being their prosecutor and an accomplice to the violence forced on them?

We are not only the “ indignants” that the media sketch, we are active citizens, decided to struggle in every way we will co-decide, through our assemblies, till all those who brought us to this state leave: Government, Troika, memoranda and medium austerity programs, banks and their representatives, e.t.c

Till we get back our lives and install a real democracy of equality, justice and dignity. The people’s assembly concerns all citizens. You can come as a citizen yourself and express your views, as everyone else.

*People’s Assembly of Syntagma square the 10th of July 2011*