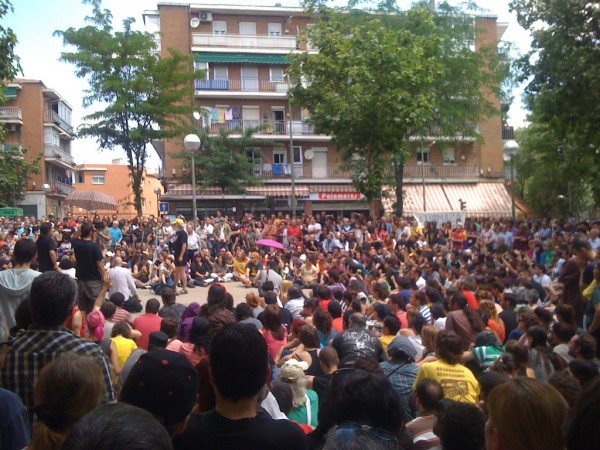 The May 15th movement has began its transition. Before voluntarily taking down the Puerta del Sol camp – which unofficially is said to be happening before Wednesday, although it will depend on the coordination with other cities – they wanted to guarantee a continuity on the streets taking the work groups to the towns and neighborhoods, decentralizing it.

More than two thousand people in the Vallecas neighborhood. Hundreds of people in Lavapiés and just a few meters away, in Santa Ana square, hundreds more, and a few more meters away, in the Plaza del Carro in the Latina district, just as many. And in Prosperidad, and in Aravaca, and in Retiro and in a long list of names who are marking the exit route for the camps in other cities.

“We had never seen this in the neighborhood”, Toñi and Luis tell us. They have been neighbors of the Tetuán district for more than 30 years, a district where we can find skyscrapers in the north and blocks where almost only Dominicans live in the south.

Madrid. Big city. Capital that weaves itself on work relationships, where we know our neighbors less and less, anomie, says post-modern sociology. Will a local assembly movement catch on? Would the young man from the Usera district go to his neighborhood’s meeting, with which he feels little connection, or rather get together with his college friends and go to the assemblies in the Tribunal or Lavapiés districts, where he hangs out? One more line of observation of this phenomenon, which is giving more answers by the way of action than by the way of contents.
There was some expectation to see how the local assemblies would declare themselves regarding the stay of the Sol camp. Waiting for the records to be brought together between tonight and tomorrow, the general feeling in the Vallecas, Tetuán or Downtown meetings is that the cycle of “Sol City” is over and that it is the neighborhoods and participation through the Internet which now have to take over.

However, there are friction issues blocking that debate: on one side, should the priority of the assemblies be neighborhood problems or first do they have to help the rest of the M15 movement reach a consensus on more general ideological proposals for all of society? O n the other, last Thursday the Puerta del Sol general assembly put out four political proposals developed by a subcommision that didn’t go through intermediate organisms before asking for approval of the document. This has caused great unrest among the commissions, which, subject by subject, are trying to put together an agenda of firm political proposals from the M15 movement.

This second issue, which remains buried but is already creating tension, and others such as a certain terminology inherited from the Sol camp and not free of internal connotations, such as “consensus on minimum standards”, has created this morning “double paced” assemblies, in which the neighbors who are not involved in the movement from the beginning tried to understand with little success everything that was being debated about.

As has happened in Tetuán, Carabanchel or several more districts according to testimonies on twitter, the attendants’ enthusiasm for taking part in the M15 movement has crashed against the assembly dynamics. “We have spent more than an hour deciding who moderates the assembly, how to moderate, when the next one will be held, at what time, where or if we allowed people to take pictures or film the assembly”, a Vallecas district neighbor told us, in the same line of thought as other neighborhoods. And, nonetheless, few people have left their places before they ended. “This is just the prologue, we will get straight to the matter in the next one”, says a neighbor from the La Latina district.

The neighborhood as a safe environment
Housing, evictions, pensions, are words that have come up in the Tetuán district debate. A line of work will be set up “to support our immigrant neighbors from police raids and to improve co-existence in the neighborhood”, in the words of one of the people who have spoken. 9% of the district’s population has an immigrant origin.
Exactly at the end of the assembly we stayed chatting in one of the small groups that had come up. “I think that the district assemblies will help a lot of immigrants become part of M15, because many of them don’t go to Sol out of fear: fear that if the police gets involved they will have trouble because of their documents, or simply fear of not being listened to”, someone points out. “The problem is that they don’t feel represented”, answers the director of a district immigrant women’s association.

Vallecas is Vallecas. The assembly has brought together more than 2,000 people, as many as the square could hold. The others had to stay outside because of lack of space. So many people that someone suggested that they should divide themselves for future meetings. Denied.

After the assembly, small groups of people discuss politics in Tetuán district. (J.L.S)