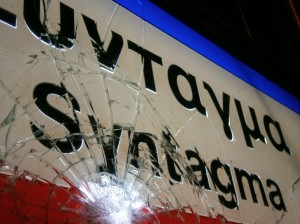 ATHENS – It was at night, and I asked my friend if it was dangerous to head there at that time. Police lines, with buses, were blocking the streets around the Square: “Can we really go there?”. In front of Parliament, a crowd was shouting and pointing toward the building. I asked what they were saying and what was the meaning of the banners. “They’re insulting the politicians. “The ass-holes will die”, says that flag, the other one says “no more exploitation””.

Climbing down the stairs in front of the Parliament, I started to see tents, stands and a big crowd, where around a thousand people stood in a circle hearing someone speaking into a microphone. The sound came from improvised speakers hanging on the very lamp-posts of the square. The person speaking left while leaving the crowd clapping enthusiastically while another person took his post. I finally realized that I was in Syntagma.
At the time the city is under heavy tension, police is blockading most of the city, not only the surroundings of the square. Their presence is really remarkable and imposes the feeling that something dark is happening, a presence you cannot see, that all of us are being watched closely. This alien presence, however, promotes a different kind of union among people, a kind of “us against them” that creates a strong bond. Nothing strange after seeing the chemical warfare treatment they got from the State last month. People are working together joyfully, laughing and with great hopes. They know their enemy and they know what they want.

On the events of the 28th and 29th of June, during the 48 hour strike, the Greeks are in consensus: “It was like war!”. With regards to their national background of riots and protests, this assumption – which is very common – promotes a real and intense meaning. People were forced to be together, to help each other out and to fight for their lives, rights and beliefs. Their faith is now bestowed upon the power of unity.

After hearing all this, on the following day, before going back to the Square, I bought a gas mask and a better camera. Going back, I found out that Syntagma was ready and opene to receive everybody. Because ‘Syntagma is protest everyday’, and daily gatherings take place in front of the Greek Parliament. In 10 days, I saw two motorcycle rallies, a demonstration against the Greek Government held by Kurds and Syrians, a march in solidarity with Palestine etc. Everyday, every-night, every-time is time for protests.

Pro-Palestine demonstrations in Athens, 12th July, in front of Greek Parliament from Wikileaks World on Vimeo.

The Popular Assembly, held daily around 9pm local time, gathers the most different kind of people and discussions. Here, there is no space for discrimination or prejudice and much worse for preformulated ideologies. The chorus of Syntagma Assembly states that it is a place for creation, experience and innovation on how humans can organize themselves into a new social structure.

The next step isn’t very clear, in between of all the chaos lies a beating heart that keeps on pumping despite not knowing where to. People tell me that a commitee to receive Hilary Clinton on July 17th is scheduled and that on the 24th it will be time to celebrate two months of the occupation. Other people are planning bigger rallies for the end of the month in order to demonstrate against the reforms on the Greek educational system. But is not only about rallying. Syntagma is about meeting people, about learning with and from people, about sharing, about respecting, about dreaming and acting. More than anything else, Syntagma rests as a totally open place to exercise freedom, creativity and engagement. In other words, the camping is a refuge – not only for the Greek people, but for foreigners who support the common cause – for those interested in experiencing participatory democracy.

Everyone is welcome to take part in any of the task-groups and once there, there is no hierarchy and nothing is decided without a consensus of all the participants. Food and water, electricity, tents, everything is organized by horizontal groups whose main aim is to support the continuity of the popular assemblies, the multi-media center (from where the official websites of Syntagma are maintained), the artistic stand and the various activities promoted by ‘The People of Syntagma’.

Let me remind you all that Syntagma is the major square of Athens, exactly in front of the National Parliament, and it is occupied since 25th May. Despite threats of eviction, boycott attempts and all the problems which arise from a public camping with thousands of people, it survives each day, reinforcing its struggle with every assembly and proving the global community (despite the lack of coverage by major media outlets) that trying a new and fairer society is still possible.