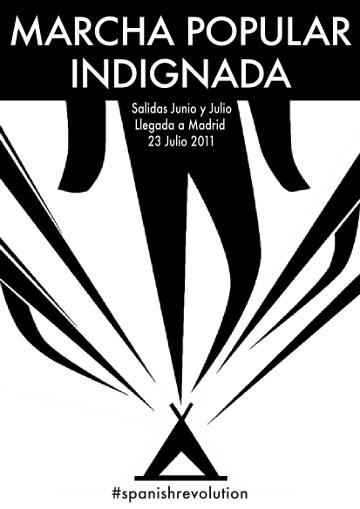 Originally published in Spanish at www.publico.es

“Indignants” from all around Spain are marching towards Madrid. The expedition, of around 500 people, will reach the capital on the 23rd of June, where they will be received with a protest outside Congress. The first walkers will be seen outside the city on Friday the 22nd, and on Saturday they will join other protesters that will arrive in buses to walk the last stretch of the way.
The initiative started in Barcelona, but it was in Valencia where they first set themselves on the road on the 20th of June. After they started, many other cities with 15M camps followed suit. The march is divided in six routes: eastern, southern, southeastern, northern, northeastern, northwestern. The western route did start to march but went home soon.

The day starts, for most of the travelers, at five in morning. After lifting camp and having some breakfast they prepare themselves to march the daily 20 to 22 km.

“It’s a beating, but by now are bodies are used to it”, says Aldo, who is taking part in the march that started in Barcelona. They walk for six hours every morning and spend most of the afternoon speaking with the people in the small villages that they pass on the way.
“We started out with a mentality that we had to change. At first we had a megaphone and we shouted out slogans. But as we went further into the heart’s of the towns we tried a warmer approach, which in the end was more productive”, explains Guzman, from the Valencian march.
The ones who started the march know that is isn’t an easy job to get people to join them. Jorge, from Murcia, explains:

“We have 16 and 200 km behind our backs. Every town motivates us, telling us to keep on going. They know what we’re doing and they support us”

David says: “The Civil Guards accompanied us because we were walking by a highway, but they didn’t fine us”. One of the most surprising aspects is the attitude that the Security Forces of the State have taken. “Three days ago, the Civil Guard escorted us because we were walking near highway, they left us on service road and didn’t fine anyone”, says David from Bilbao.

The peculiar note comes from the Northeast. Pablo Novoa, from Galicia, says that for four hours he had some very strange partners. “The public television from South Korea accompanied us for an interview. They were interested in the movement because in their countries they have protests coming form the Universities”.

“The most important thins is that from different points of Spain people have decided to walk to Madrid, rejecting corruption, with the desire of more government transparency and asking for a new model of participative democracy”, states Pablo. Fro Daniel, from the march of Asturias, participating is a challenge: “It is an incredible experience and for me, with my crutches, it’s huge challenge. On a collective level it is has been very gratifying, we complement each other and we make it work”.
The movement has different platforms of diffusion via social networks that are being updated frequently. They have a blog where they are sharing the adventure through a diary, where they tell their experience, the place they are, as well as anecdotes or needs.

Every march has similar needs: food, water, sanitary material, backup cars, but above all, solidarity. The are looking for people that want to collaborate offering a place to rest or a hand setting up tents, and of course, people willing to share ideas. Enrique from La Rioja, says that the march has fundamentally two objectives. It’s about “extending and informing about the movements ideas to people who cannot move to capitals or larger cities, as well as collecting proposals and ideas to put them all together and keep on working”.

Even though there are 100 days left for the massive protest planned for the 15th of October, the plans for the future are much larger and more ambitious, such as the creation of a social forum for the people of Spain and a larger one for Europe as a whole. The people that are marching are planning the creation of a book that will collect their experiences.

“We are telling the villages that they are not alone”

Interview with Carlos Pinto. From the Southeastern route.

1 – Since when are you part of the 15M movement?
From the first day. I was camped for two weeks in Malaga, but I had to go home because of my University. I feel fully identified with the eight points that have been put forth by Real Democracy Now.
2- What led you to join the march?
I had always wanted to walk through Spain with nothing but a backpack. In the camp we had talked about the possibility, half jokingly, to go to Madrid. When the possibility became an actual chance then I didn’t hesitate.
3 – What has been your role in the project?
Organizing the Malaga route, and afterwards, when Granada decided to join us, adapting it.

4- How is your day by day?
We are a very diverse group. We had a 17 year old girl that already left us and at the same time we have a 71 year old man that is still going on, and by now we are great friends. We are joined together by the common cause. Even though the heat is extreme and the water isn’t readily available, the hospitatily that people from these rural areas have shown towards us is huge.
5- What objectives are you after?
We are trying to explain the participative model as well as to collect propositions and demands. It is about telling the villages and rural areas that they are not alone.

1 thought on “Marches from around #Spain will reach #Madrid on the 23rd, protest planned #marchaindignada #europeanrevolution”