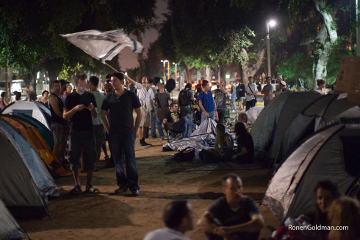 A friend is telling us what is happening in Tel Aviv, after Habima Square was taken, we want to share the joy and enthusiasm they are living:

I’m writing to you from the new protest camp in Habima Square in Tel Aviv, where dozens of tents have been set up and hundreds of people have been participating throughout the day. There is music, people are bringing food, and there is a lot of talk about how to organize and how to move forward. The knowledge we got from Spain is priceless. It’s been a bit chaotic till now, it’s unclear how long this can last and when the police will come to evacuate us, but for now they are leaving us alone. People are angry about prices of housing, food, and basic living, and they’re very upset with the politicians and the government. But it’s still unclear whether this will go any further than music and camping on the street. They had a small assembly this afternoon, but I heard mixed reactions about how it went. Tomorrow we will try again.

Assemblies started today in a more organized manner. We’re using a version of the guide from the assembly dinamization committee in Madrid. In the evening more people come, the media is here, and musicians come to perform. There’s an alimentation team that makes meals for everyone camping. There’s still a lot of confusion about the political goals of the protest, but now it’s being discussed in the assemblies. Police is keeping quiet, but they already threatened to evacuate us before Sunday.

I read out loud the solidarity letter from Sol’s International Committee today and people were cheering like crazy. We also uploaded Sol’s support video to youtube and are waiting for a projector to show it here:

Thanks to our friends in Spain. We’re moving forward!

Hi everyone, I’m Aya, and I’m writing to you from Habima Square in Tel Aviv. I will continue with the day-by-day updates as often as possible:

The protests are spreading across Israel!

Many movements and individuals have joined the struggle. Camps are planned in several cities, the national student union has joined and plans to set up camps in three campuses. Spontaneous initiatives keep popping up, like a feminist tent, a group planning a weeklong “rage” actions, and a “revolution market”.

The Tel Aviv encampement is still in place. No one has tried to evacuate us. We were on the front page of every major newspaper. Hundreds came throughout the day, well-known artists are performing, and all the TV channels were here. The prime minister issued a statement saying he is aware of the housing crisis and is trying to solve (???) it: http://www.ynetnews.com/articles/0,7340,L-4096312,00.html

Here are some links to keep your senses working:

We apologize almost all of our material is in Hebrew, we have our hands full right now, soon we will translate more to English.