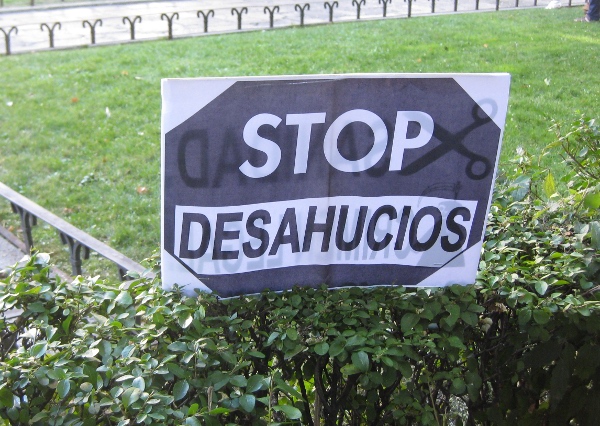 By year end 2011, the number of mortgages foreclosed in Spain since 2007 will come to 500 000. Hundreds of thousands of families have been and will be evicted from their homes by the very financial institutions that are responsible for the crisis: those very institutions that had to be rescued with tax money. Hundreds of thousands of evictions constitute an inadmissible and intolerable statistic in a social and democratic State with millions of empty flats that are fulfilling no social purpose.

Governments at all levels, instead of responding to this housing emergency by stemming the flow of evictions, appear to be more willing to endorse and protect the interests of financial institutions than to defend citizens’ most elementary rights. Public authorities are acting as accomplices in the violation of this basic right, in breach of the national legislation as well as of a number of international treaties ratified by Spain.

They are in breach of Article 25 of the Universal      Declaration of Human Rights, which reads: “Everyone has the right to a standard of living adequate for the health and well-being of himself and of his family, including food, clothing, housing and medical care and necessary social services,…”

They are in breach of Article 11 of the International Pact on Economic, Social and Cultural Rights, which requires the State to make      every effort to prevent evictions where the cause is financial. And if it does not prevent them, it must ensure that all procedural guarantees are honoured and families are provided decent alternative housing. Spain signed and ratified this pact and is consequently bound by its provisions.

They are in breach of Article 47 of the Spanish Constitution, which reads: “All Spaniards are entitled to decent and suitable housing. Public authorities shall      further the necessary conditions and enact the respective laws to enforce this right, regulating land use in accordance with the common interest to prevent speculation. Communities shall      participate in the capital gains generated by urban development.”
Evictions for financial reasons (i.e., for want of income) constitute an attempt not only against people’s most elementary needs in a context of crisis, but a breach of the national system of law. In light of the systematic violation of our rights, the Platform of Evicted Families issues a call to action. We are persuaded that the time has come to raise our voice and shout: We won’t allow one more eviction! We won’t let the bank take our homes away from us! We won’t let you go on trafficking with our needs!

Why stop evictions.
Financial institutions’ rights over mortgaged homes are overprotected in this country in ways unheard of anywhere else in the world and are causing distress to thousands of families in Spain. The visibility of our problem is shamefully out of proportion with the dimensions of our tragedy, both in the media and on the political agenda. The noise we can make is detrimental to the interests of both the banks and the public authorities: on the one hand because it soils their corporate image here and in the rest of the world; and on the other because it portrays our political parties for what they are: failed States unable to meet their fellow citizen’s most basic demands.

That’s why they want us to leave our homes in silence, to give up our ownership without a fuss. They’re afraid we’ll organises and begin to challenge evictions. Resisting evictions means defying them, confronting them, looking them in the eye. Our home is our strength: leaving without a struggle is tantamount to surrendering without before reaching the battlefield, to retreating without measuring our forces, to giving up in advance. Our home is our combat tool, our pressure vessel, our best ally.
We’re organising an anti-eviction network. Join us.

In Catalonia social organisations and community groups are beginning to network against evictions. If you live in Catalonia and have an eviction date, contact us as soon as possible. If you live outside Catalonia, we’ll try to refer you to associations in your vicinity and furnish advice.

You can write to us at: stopdesahucios@gmail.com
If you want to join out of solidarity, even if you’re not mortgaged, and help us prevent other families from being evicted, contact us. Send us a mail to the following address: stopdesahucios@gmail.com Tell us your name and where you live and give us a phone number where we can reach you. Let’s start to build an anti-eviction network. We’re neither afraid or ashamed: what we demand is justice.