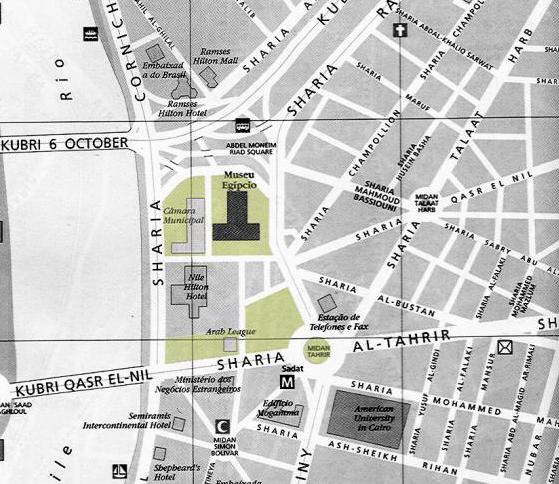 As I opened the window of my computer over Tahrir Square in the city of Cairo (al–Qahira – the Victorious) I watched, over eighteen days, as the square turned into a collective expression, arising from the relation of tensions between the demonstrators, the police, the army, the social networks that crossed the information and Mubarak. We witnessed thus the visual efficiency of the great public square, located in the central area that had recently been destined to tourism. It was suddenly filled with those who tenaciously demanded the resignation of Mubarak, shaping Tahir Square into a strategic space that allowed the exposure of the collective discontentment.

Midan Tahir (Liberation Square), so called after the 1952 revolution that established a Republican regime in Egypt, is nowadays the site of major airline companies and main tourism agencies, and a neuralgic point in the center of Cairo. The occupation of the square, where all the streets lead to, was a transgression of its common use and of the rules and codes of normal procedure, everyday circulation, heavy traffic. For eighteen days, it was a space for statement, and we can think that it was the permanence and continuity of the transgression that achieved the principal goal for the occupiers: the fall of Mubarak that ruled the country since 1981.

I reminisced and tried to learn a bit more about what had been happening lately in Cairo’s public space. Eric Denis & Marion Séjourné describe Cairo as a privatized metropolis since the nineties, when, under the effect of controlled liberalism and structural readjustment, the State sold, over the course of ten years, 100km² of desert area for real-estate operations mostly destined to “gated communities” disconnected from the historical part of the city and between themselves. Likewise, they describe another territory, grown from self-construction and informal production by deprived populations, located around 50km in the outskirts of Cairo and without any connection with the aforementioned. However, what stands out throughout the metropolis of Cairo, that has been in a state of emergency for over thirty years, is the substantial amount of empty lodgments, an occurrence that Olivier Mongin argues is a consequence of a deliberate policy of the real-estate business sector, aiming to “firm land value”, fearing inflation. According to this author, the present system imposes an economical liberation without any report to a political liberation, “a system where a non-representive power (of the State) with the monopoly of violence, maintains the array of urban terrain and the control of public space” concluding that, in the case of Cairo, “the strong power alone organizes the privatization, supporting itself in a land supply that is infinite, since it is selling the desert”.

In this context, that points out to the inequality, separation, fragmentation and the disaggregation of territory, comparable, still according to Mongin, to what is happening in Buenos Aires and that possibly indicates the future of all the metropolis, a window opens over the republican Tahir Square. The opinion of this and other authors, such as Lussaut, about the current importance and growing struggle for “places” remains in the wind and the occupation of Tahir square was an example of it.

The virtual space of communication through social networks took part in the square’s new configuration, as in some way participated the space created by the window that we all opened. Even more determinant was the physical and real presence of the demonstrators and their capacity for resistance. The occupation of the square leads us to rethink public space, but the question that is imposed is what will then have to change so that Tahir Square can maintain the new configuration it conquered, a place of intervention, communication and meeting, and that it doesn’t go back to its old condition of museum space for tourists and road circulation? >>Originally published by Buala.org under a Creative Commons 2.5 licence.