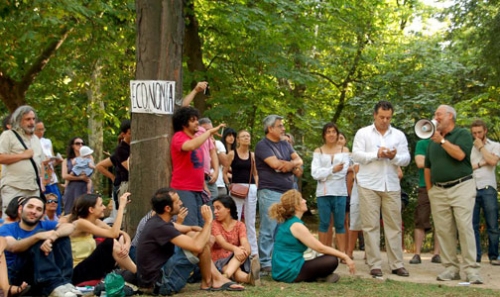 The Nobel Prize-winning economist spoke of the failures of free-market capitalism and wished the indignados good luck in the tough struggle that lies ahead.

As former chief economist of the World Bank and chair of the council of economic advisers to Bill Clinton, Joseph Stiglitz (wiki) is very much a man of the system. Even today, he continues to be an adviser to governments around the world — including the beleaguered ones of Papandreou in Greece and Zapatero in Spain.

But Stiglitz has also always been a dissenting voice within the economic community — at least in so far as one can truly dissent in the profoundest sense of the word, while still being accepted within academia and the mainstream media. Most notably, he is the author of the best-selling Globalization and its Discontents, described on Wikipedia as “a concise, devastating, and relentless indictment of the global economic policies of the International Monetary Fund, World Trade Organization, and World Bank.”

Yesterday, Stiglitz joined the indignados in Retiro park in Madrid, for the first social forum organized by the 15-M movement. He spent 12 minutes talking to a few hundred people who had gathered for an assembly on the economy, telling the indignados how he admires their energy and hopes it will be used for constructive purposes — like creating good new ideas about how to overcome the dominance of neoliberal market fundamentalism and how to reunite economic science with social justice.

Here’s a video of the speech, shot from a handheld camera (we will put up some more professional footage in the video section as soon as it becomes available):