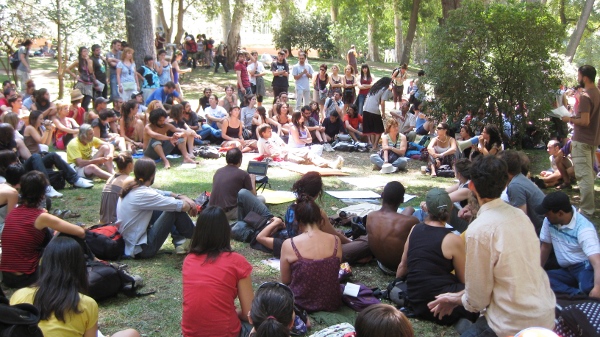 This text has been prepared by the Commission for Group Dynamics in Assemblies of the Puerta del Sol Protest Camp (Madrid). It is based on different texts and summaries which reached consensus in the internal Assemblies of this Commission (and which will be made available on the official webs of the 15th May Movement) and from the experiences gained in the General Assemblies held in this Protest Camp up until 31st May 2011.

The purpose of this Quick Guide is to facilitate and encourage the development of the different Popular Assemblies which have been created since the beginning of the 15th May Movement. This Quick Guide will be periodically revised and updated. On no account is it to be considered a closed model which cannot be adapted through consensus by any given Assembly. From the Commission for Group Dynamics in Assemblies of the Puerta del Sol Protest Camp we invite our friends and comrades to attend and take part in the meetings, work plans and internal Assemblies of this Commission, which are open to anyone who wants to come to them and actively participate in maintaining, perfecting and developing them.
Open Reflection on Collective Thinking
While we would like to share our impressions so far, we encourage you to continue to reflect on and debate these impressions as we feel that Collective Thinking is an essential part of our movement.
To our understanding, Collective Thinking is diametrically opposed to the kind of thinking propounded by the present system. This makes it difficult to assimilate and apply. Time is needed, as it involves a long process. When faced with a decision, the normal response of two people with differing opinions tends to be confrontational. They each defend their opinions with the aim of convincing their opponent, until their opinion has won or, at most, a compromise has been reached.
The aim of Collective Thinking, on the other hand, is to construct. That is to say, two people with differing ideas work together to build something new. The onus is therefore not on my idea or yours; rather it is the notion that two ideas together will produce something new, something that neither of us had envisaged beforehand. This focus requires of us that we actively listen, rather than merely be preoccupied with preparing our response.
Collective Thinking is born when we understand that all opinions, be these opinions our own or others’, need to be considered when generating consensus and that an idea, once it has been constructed indirectly, can transform us.
Do not be discouraged: we are learning; we’ll get there: all that’s needed is time.
>>THE BASICS

What is a People’s Assembly? It is a participatory decision-making body which works towards consensus. The Assembly looks for the best arguments to take a decision that reflects every opinion – not positions at odds with each other as what happens when votes are taken. It must be pacific, respecting all opinions: prejudice and ideology must left at home. An Assembly should not be centred around an ideological discourse; instead it should deal with practical questions: What do we need? How can we get it? The Assembly is based on free association – if you are not in agreement with what has been decided, you are not obliged to carry it out. Every person is free to do what they wish – the Assembly tries to produce collective intelligence, and shared lines of thought and action. It encourages dialogue and getting to know one another.
What types of Assembly have we used so far? Working Group Assemblies, Commission Assemblies, Local Assemblies (in neighbourhoods, villages and towns), General Assemblies of the Puerta de Sol Protest Camp and General Assemblies of Madrid (Puerta de Sol plus neighbourhoods, villages and towns). These latter (General) Assemblies are the final deliberative or deciding bodies from which the consensuses are decided in order to articulate the different lines of Joint Action for the 15th May Movement in each city.
What is Consensus? It is the way that the assemblies make a final decision over each specific proposal. Consensus is reached when there is no outright opposition in the assembly against the proposal. The following format must be applied to each proposal: 1) What is being proposed? 2) Why is it being proposed? 3) How can we carry out the Proposal if a consensus is reached? To sum up: What? Why? How?
What is Direct Consensus? A Consensus that is directly reached without opinions against it: Proposal > Consensus.
What is Indirect Consensus? A Consensus that is reached after debating different opinions on a proposal which did not reach a Direct Consensus. The following steps are taken to reach an Indirect Consensus: 1) What? Why? How? 2) After the moderator asks ‘Are there any strongly opposed opinions?’, and if there are, a queue for floor time is prepared. The Floor Time Team and Coordinator(s) open the first round of debate. Three arguments for and three arguments against are allowed. After that, the Assembly is asked to show its opinion again through Gestures. If consensus is still not reached when asking if there are opinions against, the Moderator will ask the Assembly to discuss the issue for three to five minutes in small groups where they are sitting. After this small break a second round of interventions consisting of Proposals for Consensus takes place. If a consensus is still not reached after these two rounds, the following takes place: a) If the Proposal comes from a Commission or Working Group, it is returned in order to be reworked, b) If the Proposal comes from an individual, it will be taken to the competent Commission or Working Group so it can reach a consensus on its usefulness and present a reworked version of it in the next Assembly, where it will once again go through the same procedure. And so on until a Real Consensus is reached.
>> THE ROLES AND FUNCTIONS INVOLVED IN A MASS ASSEMBLY:

LOGISTICS TEAM: Its purpose is to prepare and organise the Assembly area before it takes place in order to make it more efficient and functional. The logistics person(s) are in charge of agreeing on and marking out the area (within their possibilities) together with the other teams.
The Moderators’ Area is a rectangle marked out with chalk (or coloured tape stuck to the floor) in front of the assembly area like a type of ‘stage’. Between this area and the assembly area the Floor-Time Team is visibly placed and spread out amongst the participants. Within the Moderators’ Area, the Moderator and the Speaker (person who has the floor) will stand in the middle, flanked by the Interpreter(s) and Facilitator(s) who will normally be squatting or sitting on the floor when not taking part, and always within reach of the Rotating Team of Moderators and the Floor Coordinator(s).
To one side of the Moderators’ Area sit the Spokespeople of the Commissions and/or the Working Groups who will be intervening in the different parts of the Agenda; on the other side an area will be provided for the Floor Coordinator(s) who will always be within reach of the Facilitator(s) and as far as possible from the Minutes Team (who will always sit near the Moderators’ Area in order to be able to request a repetition, summary or text that has been presented) in order not to distract their attention from the conversations which take place before each turn to speak, making their job easier.
>>GESTURES USED TO EXPRESS COMMON OPINION OF THE ASSEMBLY