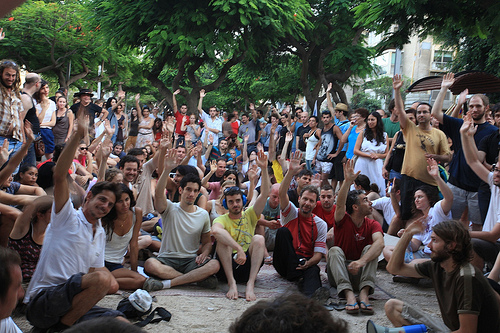 A social revolution is happening in Israel at this very moment. The people has united to demand social justice and fundamental rights from a government that serves the interests of the few instead of the citizens. Last week 50,000 people protested in the streets. This Saturday there were already 150,000 people across the country expressing their outrage over the existing economic and political system. Labor unions, local municipalities, doctors, social workers, and others have joined forces with over 30 protest camps across the country to make the message clear: we will be silent no more. They demand public health care, free education, affordable housing, raising minimum wage, and a fundamental change of priorities in the government. In short, the people is reclaiming control over state resources.

Those in power are shaking. After failed attempts to calm down the protests with bogus offers for student housing and privatization of state land, they now understand they are facing something much bigger. The director general of the ministry of finance has resigned. The prime minister announced a special task force of ministers to start a dialogue with the protesters. The tent protest leaders responded by calling this “just another manipulation” and rejecting the initiative. The forum of “heads of the market”, a group of rich families controlling most of Israel’s economy, published a statement saying “it’s time to act socially responsible.” The next day they got stink bombs thrown into three luxury towers representing Israel’s wealthiest sectors.

Tomorrow most local municipalities will go on strike as well as thousands of citizens who declared their intentions on facebook. Mass protests are planned for the afternoon. On Tuesday Tel Aviv is planning a big march to demand public housing for the poor.

Protests took place in Arab cities as well. There are now tents of Jews and Arabs together in Nazareth and Beer Sheva. In poor Southern Tel Aviv, foreign workers and refugees join forces with native Israelis in tent camps to fight for social rights.

Israel has joined the global wave of revolutions that is sweeping across the world. The people has risen, and no one can silence them now.

2 thoughts on “Israel: A revolution for social change”