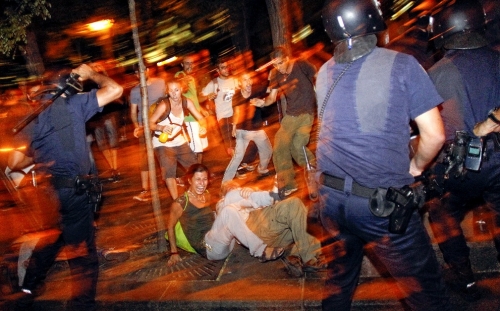 In just two days, the Spanish police has spoken out against the government and in support of the indignados — while at the same time beating them up.

Either the police has lost it, or the government has lost the police. Or both. Whatever way it may be, the predicted summer lull in Spain’s 3-month youth uprising has failed to materialize. So far, the holiday month of august has proven to be sizzling hot in the Spanish capital.

For the past three days, the streets of Madrid have been in the hands of the protesters — while a small army of riot police desperately cling on to Puerta del Sol and Parliament. Instead of subsiding in the wake of Tuesday’s eviction of the info booth at Puerta del Sol, the protests have rapidly and spontaneously intensified (pictures here!). 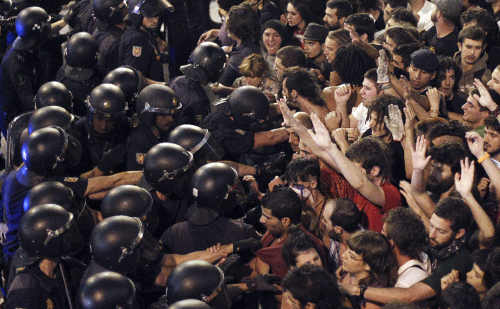 Yesterday, during the second day of mass demonstrations against the eviction, Spain’s largest police union (SUP) released a communiqué criticizing the government’s decision to evict the indignados from Sol and expressing solidarity with the 15-M movement. Concretely, the police union argued that the orders by the delegation of the government to clear the square required the police to break the law (!).

For the police, “these instructions, apart from being pathetic, are also illegal, and the delegate of the government should be the first to obey the law, to avoid a situation that is worse than it was under Franco.” The message to the arrogant politicians is clear: the Spanish police will not serve as a tool for oppression anymore. Thirty-five years of dictatorship was enough. 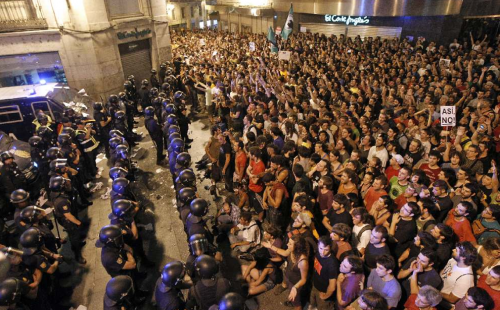 Apart from criticism of the government, the police also issued support to the 15-M movement: “We express our solidarity with the true indignados, because they are rightfully protesting. We also ask for their comprehension for our sometimes ungrateful work, and that they turn their criticism to those who are truly responsible, the politicians.” In another press release today, the SUP further stated that “the indignant are right in everything they say and ask.”

But despite these heart-warming messages of solidarity, the reality on the ground tonight was different. A small group of exhausted and exasperated policemen met with tsunami of peaceful indignados and apparently became overwhelmed with animal instincts. They lost their heads. Entirely unprovoked, a few dozen riot police charged straight into a crowd of thousands of indignados, beating indiscriminately and without any apparent reason. 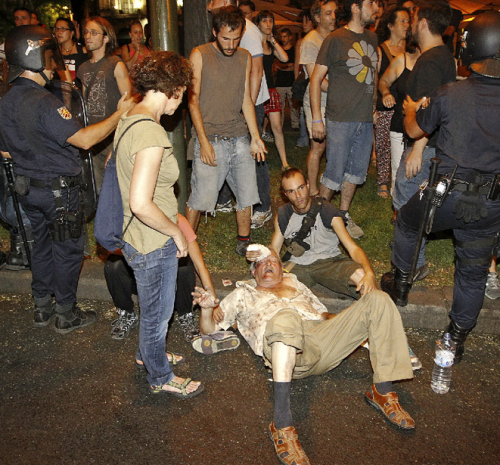 One middle-aged man was badly hit in the head and left in the street with a gaping head wound. According to eye witnesses, police subsequently blocked access to medics. A number of arrests were made and at least five other people were injured, marking the first outbreak of real violence in Madrid since theinitial attempt to evict Puerta del Sol in mid-May. Back then, the violence actually caused the protests to escalate, directly resulting in the permanent occupation of the square.

If the Spanish police force really refuses to be co-opted as a force for oppression, and if it really sympathizes with the 15-M movement as its largest union claims to, it should not only allow for peaceful protest and prevent unnecessary violence — but it should join the protests and direct their anger and frustration directly towards the people who are responsible for this lamentable escalation of violence: the municipality of Madrid and the government of Spain. 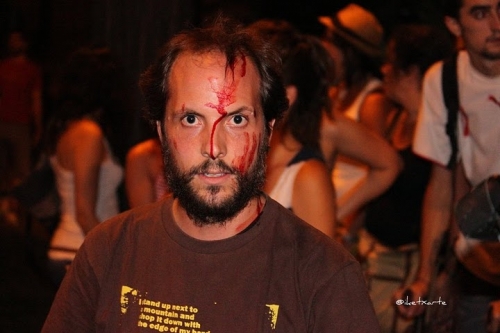 Whatever might have happened until now, if the Spanish police still respect the law, their officers should be fighting side-by-side with the people who are defending it — and arrest those who seek to overturn it. In other words: join the people and arrest the crooks in power. Otherwise Spain might shortly find itself on a slippery slope back to Franco’s days. 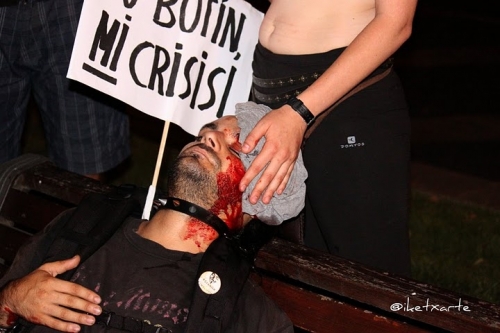