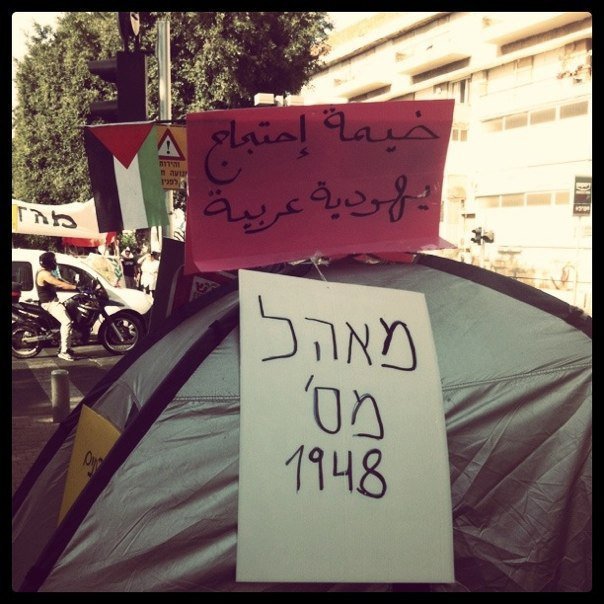 The revolution that is taking place in Israel for a social change, can produce a really profound change in Israeli society as we can see in the relase that we publish below:

We are a group of Palestinian Arab and Jew citizens that believe in shared sovereignty in the state of all its citizens. Instead of thinking about separation and constrains, we think of the possibility of joint existence.

Since foundation of the state – Israeli policy of divide and rule, prevents real change and produces boundaries for deep social demands. If we work together we can only benefit.

What do we want?

We want this struggle to deal with housing shortage among Arabs and Mizrachi Jews in Israel, both in large cities and in the villages.

We want to stop the eviction of Palestinian families as it happens almost every day in Jaffa, Lod, Ramla and elsewhere in Israel and the Occupied Territories.

We want to end the discrimination of the Palestinian Arabs in the rental and purchase of real estate, which became “legitimate” in the Israeli- Jewish society, as the “Letter of Rabbis” showed us.

We want to change the land policy in Israel, so it will address the historical justice to Palestinian population. No more land confiscation, no more house demolitions. We live here together, it’s time we start to internalize it.

We want to talk about discrimination in state institutions, education, health, culture.

We require recognizing the basic right of the Palestinians in Israel and in the Occupied Territories to set their own lifestyles.

We want to emphasize, there can be no social justice while this state occupies and oppresses Palestinians, and justice should be to all. In Addition, many of the state resources are allocated to the occupation: by establishing walls and barriers, that embitter the life of the Palestinian people, or by securing and supporting settlements. Occupation takes a lot of money, which can be used to improve the life of the Jewish and Arab population in Israel and the Occupied Territories.