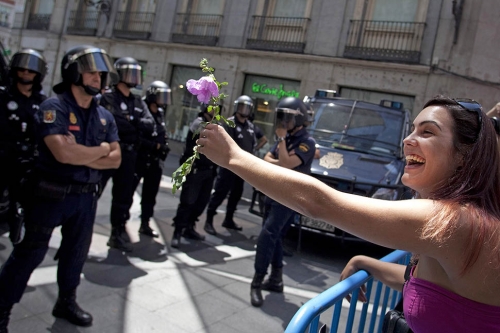 The international commission of the indignados in Madrid has released this fascinating treatise on the role of non-violence in the movement.

Originally published by @Acampadasol, it is reproduced below:

The 15-M movement is a nonviolent movement. It is something that is so essential that it didn’t even require a decision taken in the assembly. It simply goes without saying, it has emerged as a pure self-evident fact. We do not decide upon our DNA, we are born with it.

So strong is this “undecided decision” that no one has contravened it, despite the provocations, the evictions, the beatings. (There are other “undecided decisions” which are known to everyone: that we are a horizontal, inclusive, respectful movement, without representation, not wanting anything to do with acronyms and political parties, etc.).

Nonviolence does not mean non-conflict. We have occupied places, we have demonstrated without permission, we blocked evictions, we have thrown the police out of the neighborhoods… That is, the 15-M nonviolence is not passive, it is not compliant with the law nor has it taken on the conventional form of politics. It is active, rebellious, disobedient and creative.

The choice for nonviolence is not a choice to shun conflict, but rather to put this conflict in our own terms, choosing the scenarios and setting the pace.

What does it mean to have “strength”? Those who have strength are those who can alter and modify reality, challenging dominant agendas and imposing their own own problems, to reveal what the others have attempt to hide and to say what the others have forbidden to be said, to transform lives, ties, and vibrations between human beings.

Violence and strength are not synonymous. The strength that one has is not measured by the level of violence that he or she can exert. The strength of the 15-M movement passes (among other things) for their ability to accommodate plurality, to take the initiative and be unpredictable. If the 15-M movement has “decided” to be nonviolent, it is because it senses very clearly that violent actions — attacks, threats or intimidation, riots and clashes with the police — undermine these three keys to its strength.

The authorities have been looking very clearly for images of riots from the first eviction of Plaza Cataluña onwards: these images have been seen thousands of times and confirm all the stereotypes that divide and isolate those who protest against the rest of the population [I didn’t understand this sentence: anyone got a better translation?]. The movement has been extremely clever to continuously abandon the scenarios that they prepare for us and that they expect us to take. We went out on a tangent. It is striking that from within the movement there are still those who are willing to provide the politicians and media with the images that contribute to the erosion of the broad legitimacy and social support of the 15-M movement [not sure if I understood this sentence correctly? again, anyone got a better translation?].

We went out on a tangent because we do not want to feed the already well-known spiral of repression / arrests / injuries / fear / anger / reaction / anti-repression campaigns, where we lose all initiative to keep asking questions about the society in which we would like to live together, how we want to govern, and what to do with the wealth they produce between them, and so on.

Violence makes us predictable: it reinforces the positions and roles (police repressor / protester victim). Calling a police officer a “hijo de puta” confirms the situation and the division of roles. Everyone knows who he is, what his identity is and what to feel towards the other. Surely this is not something very serious, but it isn’t really subversive either. Instead, the gestures that we have often seen at 15-M demonstrations compel the police positively, with forms of irony or empathic communication, to dislodge the situation: embarrassed, uncomfortable and restless, they interrupt the “automatisms”, challenge the clichés, ask questions, short-circuit the predictable, so that everyone knows he has to think, act and feel.

Us against the police. The police against us. It is an image far too comfortable for what we’re doing, the line of separation is too simple. Our struggle is not like that. The enemy we fight is a “logic” that, in the first place, we need to transcend within ourselves (for example, in the thousands of daily decisions by which we maintain this system of which we all a part, because no one is outside of it). There is a great “potential for humanization” in the 15-M movement. We say we are human beings and not commodities in the hands of politicians or bankers. For the same reason, we think that a policeman is much more than his “function” and we thus direct ourselves at his humanity (when we engage in a dialogue or remind them that they too have mortgages, but also when we shout “shame” during an eviction or a raid).

Are violence and nonviolence compatible? Experience shows that violence is always placed at the center of what is happening, like a vortex that sucks and pulls everything else in. Nonviolence can be expressed in many ways, violence in only one. In the nonviolent actions, there can be many different people, while violent actions always involve a very specific group of people (male, young, etc.). We want to affirm, both in the form of our organization and in our way of being in the street, the features of our DNA: horizontality, openness, multiplicity.

Losing the initiative, losing the plurality, losing the unpredictability, means losing our strength. Being strong is being radical. Nonviolence is what has made us and continues to make us stronger and more radical. Destroying without destruction is the best form of destruction.