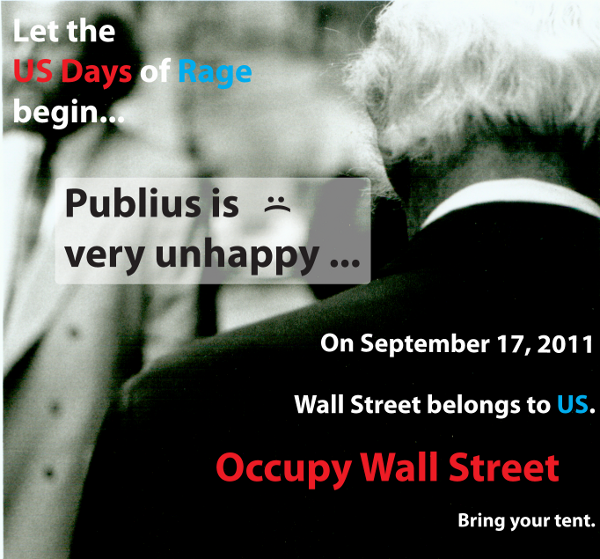 Joint Solidarity Statement by US Day of Rage and the October2011 Movement: Our struggles are interconnected and so we organize in mutual support and solidarity with each other.

The Freedom Plaza beginning on that day to nonviolently disrupt the disloyal, incompetent, and corrupt special interests which have usurped our nation’s civil and military power, spawning a host of threats to our liberty, lives and national security.

The October2011 Movement protests corporatism and militarism because they prevent solutions to our current crises which would create a more peaceful, just, and sustainable world from being implemented. Instead concentrated corporate interests rule our elections and political process so that wealth continues to be funneled to the top 1%.

US Day of Rage is calling for free and fair elections, not elections manipulated by the economic elite, special interests, or corporate media, where choices are limited to bought candidates and two corrupt parties. US Day of Rage is organizing with OccupyWallStreet to create a tent city in the financial district of New York beginning on September 17. October2011 and OccupyWallStreet have endorsed each others’ actions.

Legitimate government is born of the people expressed by its citizens in free and fair elections. It does not spring from a tyranny of special interests, crony capitalism, or a system or ideology that runs counter to the aims of life.

Free and fair elections inspire good citizenship and public service, because they engage the intelligence and genuine good will of the American people. They produce the kind of stewardship our nation desperately needs, because they ensure that citizens can influence their destiny, and make genuine contributions to society unlike our present system where the government moves in directions the majority of Americans oppose putting the profits of campaign donors ahead of the wishes of the American people.

Free and fair elections are steps towards remediating the myriad ills and abuses of a corrupt and illegitimate government, which preys on the resources and spirits of citizens, and violates rights of the other peoples and nations.

The October2011 Movement and US Day of Rage know that abuses of the people and planet will end when we take unified and persistent action. We stand in solidarity with each other and with the growing nonviolent movements around the nation and world to call for democratization of our society.