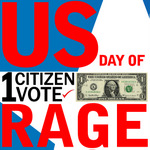 This release was sent by our partners of Us Day of Rage after the assembly of last Saturday, August 13 2011 in New York, USA.

US Day of Rage per se is an idea: One citizen. One dollar. One Vote. In other words, only citizens should make campaign contributions in local, state, and federal elections, and that those contributions should not exceed $1.00 (one dollar).

US Day of Rage has principles (http://www.usdayofrage.org/our-principles.html), which we have defined as, unenforceable guidelines governing one’s personal behavior or the behavior of a group.

We are non violent.

We place principles before party. US Day of Rage will never endorse, finance, or lend our name to any candidate or party. We support a citizens right to so affiliate, and we understand that individuals and groups participating in the US Day of Rage may be so affiliated.

Our third principle is that we are volunteer.

And, as a group of people, (and as individuals) we are autonomous, except in matters affecting the whole. Meaning US Day of Rage as an idea will never endorse violent acts, or political candidates or associations, because it violates our principles.

On July 13, 2011, a magazine, Adbusters called for an occupation of Wall Street (http://www.adbusters.org/blogs/adbusters-blog/occupywallstreet.html). It was a call to said action. That is all.

At the assembly last night, the facilitator said that a group of people called for an assembly to occupy wall street.

So these are four distinct actions.

On July 27, US Day of Rage endorsed the call to action by occupywallstreet.com to #occupywallstreet. (http://www.usdayofrage.org/public-announcements/97-usdayofrage-occupy-wall-street.html). The statement was amended in parts today, August 14, 2011.

We have also attended 2 NYC assembly meetings (ex-legislative meetings of people and facilitators that purport to be individuals and not representatives of any group) who are organizing an assembly to occupy Wall Street on Sept 17.

At the Aug. 9 assembly meeting, I introduced myself as a part of US Day of Rage The meeting was long but productive with members of the group forming a structure and intention to political discourse and the formation of working groups for the purpose of the assembly occupying wall street on Sept 17, and the possibility of forming thematic groups to engage and analyze non practical and more theoretical matters of interest. The group was facilitated by individuals with experience of public assemblies in Spain.

At Aug 13, 2011 assembly, I introduced myself as a member or US Day of Rage and the issue was immediately brought forth that only individuals could participate, not groups. I find no philosophical problem with the parameter either as an individual or an administrator of usdayofrage.org or the main twitter feed.

Following shortly after the requirement for clarification, a proposal was brought forth to hold the next assembly on the picket line of the Verizon workers strike. I blocked the proposal on the grounds that it seems highly hypocritical of the assembly to say, that I can only attend the assembly as a individual, but we should hold the next assembly on the lines of a legitimate association, but nevertheless, a major special interest in American politics. How are they more legitimate as a group, than the spontaneous and organic association of individuals around our idea, “One citizen. One dollar. One vote.”?

Those special interests are also not identifying themselves publicly. Several members of the assembly come from the Bloombergville encampment at City Hall: (see http://www.democracynow.org/blog/2011/6/24/welcome_to_bloombergville_new_york_activists_fight_budget_cuts_by_camping_in_front_of_city_hall time 6:16)

At US Day of Rage, the break down of our institutions of representation with campaign financing by special interests, and our press with the organic horizontal and vertical growth of world wide corporate media, and the corruption of government is not a left or right issue, it’s an American issue. It is destroying the credibility of government, and creating a toxic political situation, a breeding ground for a broken political economy, cynicism, extremism, and violence.

Our national problem is exacerbated by a public discourse which consists of ideological talking points and finger pointing.

US Day of Rage, supports an individuals right to associate and organize, but we will not stand by and allow our support for free assemblies of people and the occupation of wall street to be covertly managed by any special interest, be that special interest a union or a corporation.

So coming back to our principles. US Day of Rage cannot endorse any political party or candidate because it would violate our principles. We also believe the success of engaging average Americans in the reform of our institutions of government needs both left and right.

Let every man and woman have their self interest, but lets make sure that our institutions are healthy so that our government is credible and our elections are free and fair.

1 thought on “What is the NYC Assembly to #occupywallstreet on #sept17, and who is behind it? Notes from August 13 NYC #antibanks”