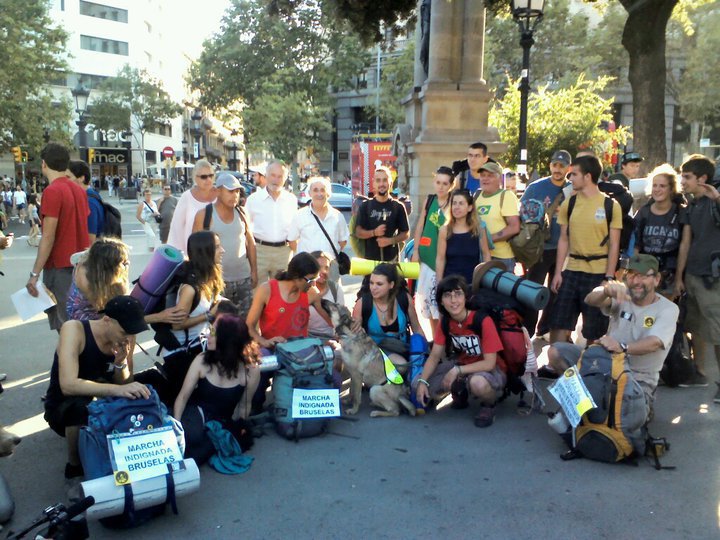 The Popular March to Brussels that left the Puerta de Sol of Madrid on July 26th, is now at the Pyrenees. Until today, over one hundred people have decided to go to Brussels. The Marchers are, among other places, from Italy, Greece, Germany, France, Russia, USA, Cuba, Colombia, Mexico, Tunisia, Poland and England. Women and men of all ages are sharing this experience.

After twenty-three days on tour along towns and cities in Northern Spain, on Wednesday August 17th, early in the morning and from the city of Irun, the March will cross the border. Then, they will meet their counterparts in France at Baiona, where a warm welcome is prepared.

On Monday, August 8th, also the Mediterranean March to Brussels left the city of Barcelona in their journey to the Belgium capital. The Marchers are currently 21 and tomorrow it’s expected that several people will join up them. Besides, 12 participants have already confirmed their presence in the neighbour country, who will join up the March to accompany them to cross the border.

For the moment, they have already made stops in Badalona, Mataró, Canet de Mar, Blanes, Caldas de Malavella and Gerona. The spirit of the assemblies of the area is very favourable. The arrival of the march and their participation in the meetings are expected with a great enthusiasm.

On this tour many assemblies took place, collecting the complaints and proposals of the voiceless. Further than the different local and all-kind needs expressed by the people, there is a common factor which is repeated along the Mach: the disastrous consequences of implementing some economic policies and those measures that undermine, instead of favouring, the rights and the indivisible values proclaimed by the EU Constitution and its Charter of Fundamental Rights: Dignity, Freedom, Equality, Solidarity, Citizenship and Justice.

The expected arrival date to Brussels is on October 8th. Several activities are going to be carried out with the rest of the Marches across Europe. All they aim to build new paths, in which the way of collective thinking and the assembly structure will be the dynamizers of this historic event.