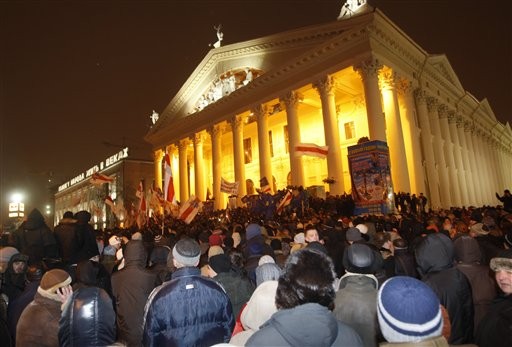 First published in spanish at www.periodismohumano.com. Written by Claudia Ciobanu.

Hundreds of young people in Belarus take the streets weekly, bonding through social networking sites. They are protesting against the lack of free speech and the iron fist of the regime.

At 7:00 pm every Wednesday, hundreds of citizens from Belarus applaud or make their cell phones ring simultaneously in the country’s main squares. It is the Revolution Through Social Networks movement, created nine weeks ago by a group of students. The phenomenon has grown in the Russian equivalent to Facebook, Vkontakte, creating a new threat to President Alexander Lukashenko’s regime.

“This is not a traditional movement of Belarus’ opposition. Participants are people that were never involved in politics and that had never protested before”, explained one of the five founding members, Mikita Krasnou. “The citizens of Belarus were looking for new organizers, new representatives”, he added. “Traditional political opposition is also interested in participating in this movement, something that has brought it closer together”, Krasnou added.

The group’s strategy is confusing to local authorities. For example, hoping to stop any interruptions, on the 3rd of August, with the occasion of Belarus’ Independence day, police announced strict applause restrictions: you could only do so if you were an ex-solider or a veteran. Whoever disobeyed would be arrested. Authorities have also limited access to Internet use. Over 40% of the population has access to social networks, but they use them from their work space, and if they work for a public company they cannot access independent sites.

Since last year, whoever wants to use cyber-cafes have to present their passports. And since last June, every e site in the country are forced to use the national domain (.by), making them easier to control. Plus, every Internet provider belongs to the state, and connection is expensive and ineffective. In the last few months, access to Vkontackte has been blocked on Wednesdays.

But still, the KGB (security agency) has employed even more repressive and brutal tactics against cyberactivists. On August 3rd there were many arrests; others, whose cell phones were tracked down because they were used in the public squares during the protests, were interrogated.

Since the beginning of the protests, around 1.500 people have been arrested, some for a couple of days, some have been sentenced to year-long terms.

“Fifteen years ago, if someone belonged to the opposition, one was either a politician or a combatant, now you simply have to be a combatant”, said Aliaksey Shydlovski, one of the first political prisoners of the post-independence era and co-founder of Juvenile Front and Bizon, two movements involved in the current political actions. Exiled in Prague two years ago, he thinks that “people that are marching these days in Belarus are braver than us, especially women”. ” The regime has become insecure, and therefore tougher with resistance“, he said.

This new weakness Shydlovski detects in the regime stems mostly from the economic crisis that has crippled the country since last year, even more so after Russia shot up gas prices in the end of 2009. Only last year the national currency devaluated 50%, making prices of basic goods so high that the population started a process of accumulation to survive.

As Belarus does not count with the support of the IMF, they turned to a stabilization loan of 3.000 million dollars, given by the Eurasian Economic Community, controlled by Russia. The conditions for this loan imply the privatization of state enterprises. Half of Beltransgaz, the national gas company already belongs to Gazprom, and the rest of the shares could go in their direction shortly. Around one fifth of Russian gas sold in Europe goes through Belarus.

“What Russia is doing is using economic sanctions to weaken Lukashenko so they can obtain control of Belarus’ economy for Russian oligarchs”, said Raman Kavalchuk, another opposition leader from the Juvenile Front generation. “Lukashenko will fall in time. And our movement will definitely continue, more mobilizations will come from the Web. We will need the help of the Unions and other independent initiatives to get more people on the street. But this can also go slowly: most of the population will not accept not eating meat because of the high prices”, Kavalchuk declared.

Selling important shares of the State to Russia will definitely weaken Lukashenko further, but without doing so he would not have a way out of an economic crisis that is turning even his supporters against him. These are the same supporters that saw economic stability as one of his virtues.

“The three most important political events of the year were the revelation that KGB tortured political prisoners, the auto union’s protest against the increasing gas prices and the Revolution Through Social Networks”, said Alex Michalevic, a politician exiled in Czech Republic, who spent two months in jail after being a candidate to the Presidential Elections of last December.

Mikita Krasnou suggested that “there are different ways of making Lukashenko fall: first we tried it the legal way, so that the regime has no excuse to arrest and beat us. Now we have many more supporters and people who are telling us through the Web that they are ready to join us and solve problems, we will try to pass from massive support to organized groups that are ready to work all the time”.