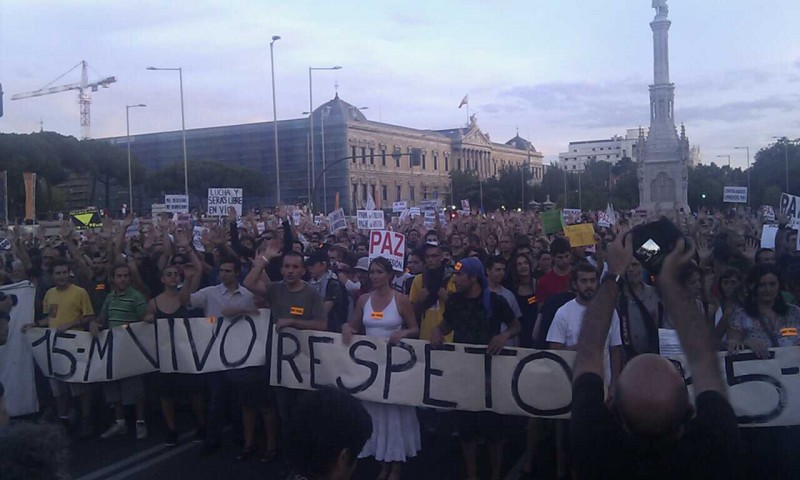 In the wake of the recent police-mediated eviction of Punto Sol (our information centre at Puerta del Sol, Madrid) and subsequent developments (police siege of Puerta del Sol, closure of the square’s underground and train stations, spontaneous demonstrations on surrounding streets, police repression), a group of us decided to lay down a series of thoughts prompted by those events. The result is the text below. While aware that there are many things in our movement which need to be improved and certainly not oblivious to the tension that has cropped up on occasion, we drafted the text to proclaim that this strong and powerful movement refuses to be cast as a victim and that the time has now come to do more than just protest: we need to retake the initiative, come back to the things we want to do.

When the local and national governments provocatively closed Puerta del Sol to the public at large, the 15M Movement responded with a strength and intelligence that we should continue to develop in the future. With that attitude, we ultimately succeeded in freeing the square, not only for  ourselves, but for everyone. In the process, we set off a wave of criticism (even among the media and the police force itself) that questioned the legitimacy of the authorities’ preposterous decisions. In effect, we thwarted an attempt to institute a state of emergency.

By practising the 15M values that have characterised the movement since 15th May: collective intelligence, horizontality, inclusivity and non-violence.

COLLECTIVE INTELLIGENCE. The authorities sought to engage us in a direct confrontation around Puerta del Sol… but we decided that if they occupied the square, we would occupy the rest of the city. And that’s exactly what we did: we demonstrated all across Madrid, en masse (in August!), with the enthusiastic support of the rest of society.

HORIZONTALITY.  In each new situation, instead of letting a chosen few make hasty decisions, we assembled to adopt collective, broadly based agreements. And so instead of taking to Puerta del Sol, we marched on the city’s other emblematic streets and squares: Gran Vía, Plaza Mayor, Callao, Plaza Jacinto Benavente.

INCLUSIVITY.  This movement derives its strength from its numbers and its diversity. The last few days’ events stand as further proof of that. Our plurality belies all the labels we’ve been saddled with. With the strength, joy and power afforded by the spaces we occupy, each of us feels they are part of us.

NON-VIOLENCE. From the outset, the authorities have tried to define 15M as a violent movement. It’s their way to neutralise our strength, to reduce our plurality, to deprive us of our legitimacy and social support. Non-violence enables us to express our concerns publicly in many ways: by walking around, stopping here and there, chatting with police officers or shouting “shame on you!” at them, embodying anger but also joy, drawing strength from our fragility, breaking with the foreseeable, with what’s expected of us. Non-violence is what enables many of us to speak out, despite our differences: men and women, young and old, legal residents and undocumented migrants, the courageous and the cowardly.

We’ve learnt these last few days that our most valuable asset is what we are and that asset needs to be developed. The characteristics that have defined the movement since its inception – inclusivity, horizontality, collective intelligence and non-violence – hold the key that will open the door to world-wide change, and change in our own lives.

The slogan that headed the demonstration culminating at Puerta del Sol last August 5th says it all:

1 thought on “The characteristics of the 15M Movement: the key to changing the world and our own lives”