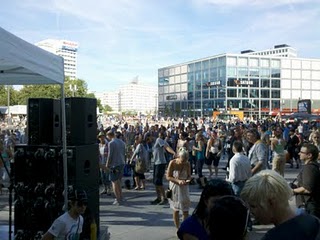 Berlin has its own Outraged camp: a loose network of politically-critical people started occupying the city’s main square, Alexanderplatz, since Saturday night, following the example of north-African and Spanish revolutions. After the nightly event “aCAMPada Berlin goes aCAMParty” it was decided to camp out in order “to demonstrate against various political events, that aren’t compatible with the free democratic basic order of the Federal Republic of Germany anymore”, according to a local newspaper. Some of these incidences are “the manifested intention of the Merkel-administration to establish an European economic government, the participation of the federal government in NATO-war against Libya and the feared military intervention in Syria. We see in all of these developments in the last days an acute danger for peace and democracy”. The motivations of the outraged of Berlin were illustrated in a letter some of them sent to global community last Sunday.

The camp counts from 50 to 100 people, actively taking part in the various assemblies and creative projects, gaining active support from different local groups and citizen initiatives. The occupation of Alexanderplatz is registered as a demonstration, but police has threatened the participating groups of the direct democracy project with eviction several times. The movement, which considers itself an open forum and public platform, resists, but faces intensive harassment from police, who do not allow tents on the square over night, putting up banners, sitting and eating at tables, or sleeping (!), basically forcing the protesters to “stand” their ground,sleeping upright.

Germany, having been said to be less affected by the international economic crisis and with their citizens remaining rather silent and passive, is experiencing a wave of enthusiasm. Analyzing the countless reactions and articles on Twitter,Facebook and blogs, the action is receiving immense feedback from people all over the country,many directing themselves towards the capital. The camp is expecting further reinforcement on the weekend. Even so, the activists are desperately calling for people to “pack their tents” and come down to Alexanderplatz.