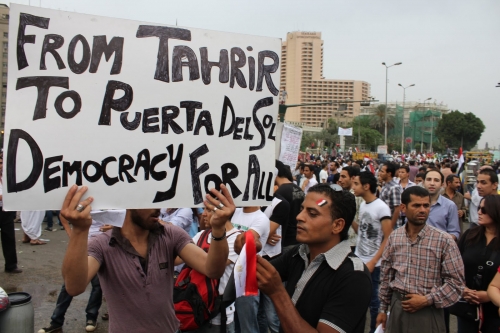 The sun shines out of a corner. Its crystalline laughter unfolds a bridge over the sea. People cannot cross over it. But you can hear their whispers.

Her name was hope. In the deepest darkness of night she was but a tiny little seed, planted in the empty pool of our collective imagination. And as the forces of darkness closed their invisible curtains on the world, as the tyrants declared that the End of History had arrived, she lingered there in silence.

But over time, in the shadow of the ages, she was nourished with the blood of martyrs and the tears of their mourning mothers. Until, one day, fear finally gave way to fury and a deafening call for freedom resounded across the lands. The half moon sparked the flame of consciousness. Hope germinated in the arid desert soil. A seedling of selflessness had sprouted and suddenly shone forth for all the world to see.

As if by design, she took root in the cradle of civilization and grew tall into the sky, crying out to rectify the injustice and oppression which so long had kept her petrified. Reborn as the child of her time, she strode forth through the lands of the Nile. She walked like an Egyptian and roared like a lion. Seduced like Cleopatra and shone like Orion. Arose like a phoenix, crying out to Zion, “give justice to my people, or I would rather die.”

She built bridges, he destroyed them — he rode camels, she ignored him — he moved rivers and she wept in them. And when her tears finally flowed out into the Nile, they carried with them a tiny little seed. And even in the deepest darkness of night, as the winds of change carried the seed of hope out into the endless sea, the currents of history conspired to bring her right to where she needed to be.

And so, when the Serpent of the Nile was finally slain without force, a dream was born inside our minds. With a loud and cracking sound, amid the agonized thunder of a toppled tyrant, the Old World was torn asunder. The universe was pried open. Right there, right then, a radiant new Sun shone forth from the heart of the unknown, and a whole new range of possible worlds came raining down onto the dry desert sand of our collective imagination.

For a moment, hope drifted aimlessly around the sea like Aeneas, looking for a future, longing for a home. But when the the deluge of debt was washed over the Old Continent, a wave of indignation finally brought her out onto our shores. On one beautiful crisp morning in May, she finally arrived at the Gate of the Sun, and was let in by a generation starved of hope and opportunity. A cry resounded across the land. At long last, hope had come to the people.

Now that the Gods had failed and the pigs been bailed, it was time for the halls of power to be scaled. They shook the walls with their voices, humble yet brazen, and firmly set their fearless gaze upon the invisible chains that bound them. On that beautiful day in May, the people took back their streets. Reclaimed their squares. And regained their dignity. The word quickly spread from land to land. Have you heard? The people have risen. And things will never be the same again.

The raindrops give up, one after another. The cloud rises, remorseful and gray, after watering the sand. The sun shines out of a corner. Its crystalline laughter unfolds a bridge over the sea. People cannot cross over it. But you can hear their whispers. Voices are calling from the other side of the sea. Voices are calling, riding the white horses. They flow from the alleyways, and at the heart of the square, they challenge the forces of darkness in the blinding light of day.

Voices are calling, from the other side of the sea. They chant in unison, their banners flowing proudly in the wind. A young child holds up a flower to her faceless master. The Ivory Tower starts to crack. Inside the belly of the beast now grows the seed of hope. She is my daughter. She is my sister. She is my mother. She is you. She is me. We are one. We are all. Give hope to the people and love will shine forth. One world, one revolution.