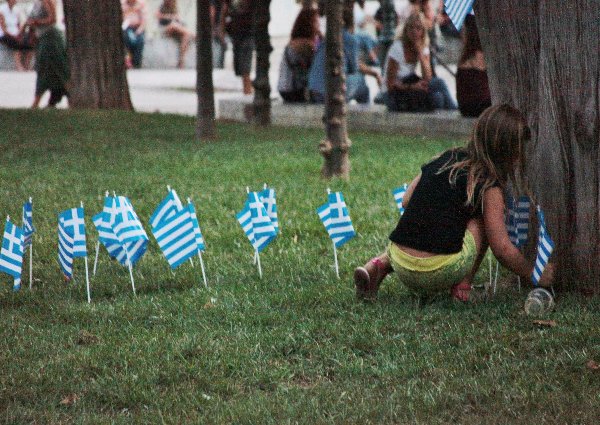 On September 3rd, we are everywhere — we fill up Syntagma Square

The squares are us and we are everywhere. We are all. We started as indignant people, we have decided, and in a little while we will be revolting in masses until those who drove us here go away. Until we kick out the bankers and the market’s governments and system.

We all agree that we do not need any spokesmen in this movement, because by definition, but especially in the context of this political and economic system, they will be corrupted, cut off from the people, and will betray the people. We want to decide collectively for ourselves. We demand to take our lives into our own hands.

The 3rd of September (the day when the first Greek constitution was drafted in 1843, and also when PASOK, the ruling party was created in 1974) is a date we can retake, by giving it back its original meaning, that of the people’s needs.

We do not have any illusions: we understand that we cannot have direct democracy and people’s rule without overthrowing the government, the Troika, and the whole political and economic system.

We call all citizens to the big demonstration and people’s assembly in Syntagma Square and all the country’s squares on September 3, 2011 at 19:00