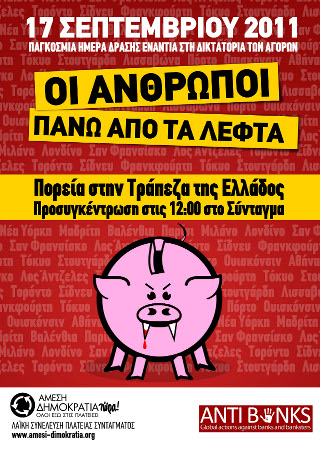 For years now, bankers and multinational companies have been gaining profit to our detriment. An economic dictatorship is being built by the markets and their employees step by step. Political authority has been initiating all its plans while impoverishing countries and encroaching on peoples’ rights, so as to acquire more profit, more “blood money”. In the last two years, Greece has borrowed more that 200 billion Euros under onerous terms, more than 100 billion of which have been given to the banks, which keep funding the system with money they take from us.

Money and those who are managing it are the sources of evil. Private institutions, banks and multinational companies play monopoly on our backs. This has to stop! We refuse to let the markets dictatorship and the bankers’ mafia destroy our lives by looting our salaries and pensions and stealing our houses, so as to save their banks.

We are joining our forces and reacting aside from colors and political parties, since they all serve the same system. We wish to end monetary occupation and knock down the markets dictatorship by toppling the system that puts money over people. The time has come to shoot down the symbols of the global economic mafia by creating a society that will not be governed by money.

This is why, on Saturday September 17th, we will all gather at Syntagma square and start a demonstration towards the bank of Greece, where we will hold a protest rally.

Because people come before money!

The People’s Assembly of Syntagma square.