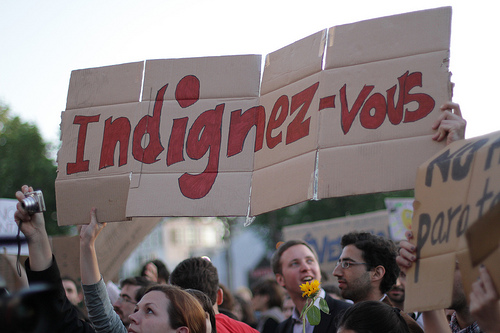 1 We, the Indignados of the Bastille, share your indignation and we support the desire to win social justice in Israël. Against economic predators (whether they are national or international), the time has come for peaceful and legitimate change.

2a Our movement is non-violent, and although a political movement, it is not associated with any political party or trade union. We aim at social justice based on the rights of all, according to universal principles.

2b The humanist values we defend apply to everyone, whatever their origins or beliefs might be. They are the foundation of solidarity between individuals and between peoples.

2c We want to further solidarity between all peoples, a solidarity which seems to us necessary

in order to fight against an international oppression, and to create in the world we share the

conditions for the peace and justice we all aspire to.

2d As human beings demanding real democracy, we cannot support any political régime which does not respect the right of all to dignity and to full citizenship.

2e Political equality and the right to dignity cannot be separated from the respect of the right for each people to self-determination.

2f The expulsion of people from their lands and living places, the destruction of their goods and their culture, the occupation and confiscation of territory and colonisation are intolerable whatever the excuse.

3 In France, the government encourages xenophobia and racism. They attack the right of immigrants to full citizenship. It sustains deadly economic relations, such as the arms trade, ultraliberal commerce, and follows warlike policies. We denounce them as irresponsible and criminal.

4 You, just like us, are attached to a global movement, of which the « arab spring » revolutions are the spearhead. How can this be unless the indignation and the rights of Palestinians are fully taken into account ?

5 We propose to dialogue with you about the usefulness of integrating these considerations which we consider universal. In this way, it would be possible for your movement to exchange dialogue with all Palestinians, to take innovative initiatives and to become integrated into the movements which are at present demanding social justice and real democracy. Our goal, which is a universal one, must include all the people around the Mediterranean sea.

Our international manifesto is attached.

Adopted by the General meeting of the 4th September 2011