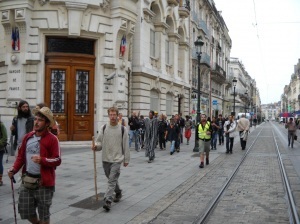 THE MARCHES GOING TO BRUSSELS ARE ARRIVING TOGETHER IN PARIS ON #SEPT17 !

Today and after some months, the indignants, take the squares to reinvent democracy for the future generations.

And you, are going to accept that for a long time?

We want an economy at the service of the people, to grant respect and dignity.

From all Europe, the citizen marches that are going to Brussels will arrive to Paris , having as goal international sensitization.

The 17th, we will welcome the marches at Cité Universitaire, and we will show our indignation all as one voice in Bastille square, for a true democracy and against financial dictatorship.

– 15h : Debate about the debt and austerity