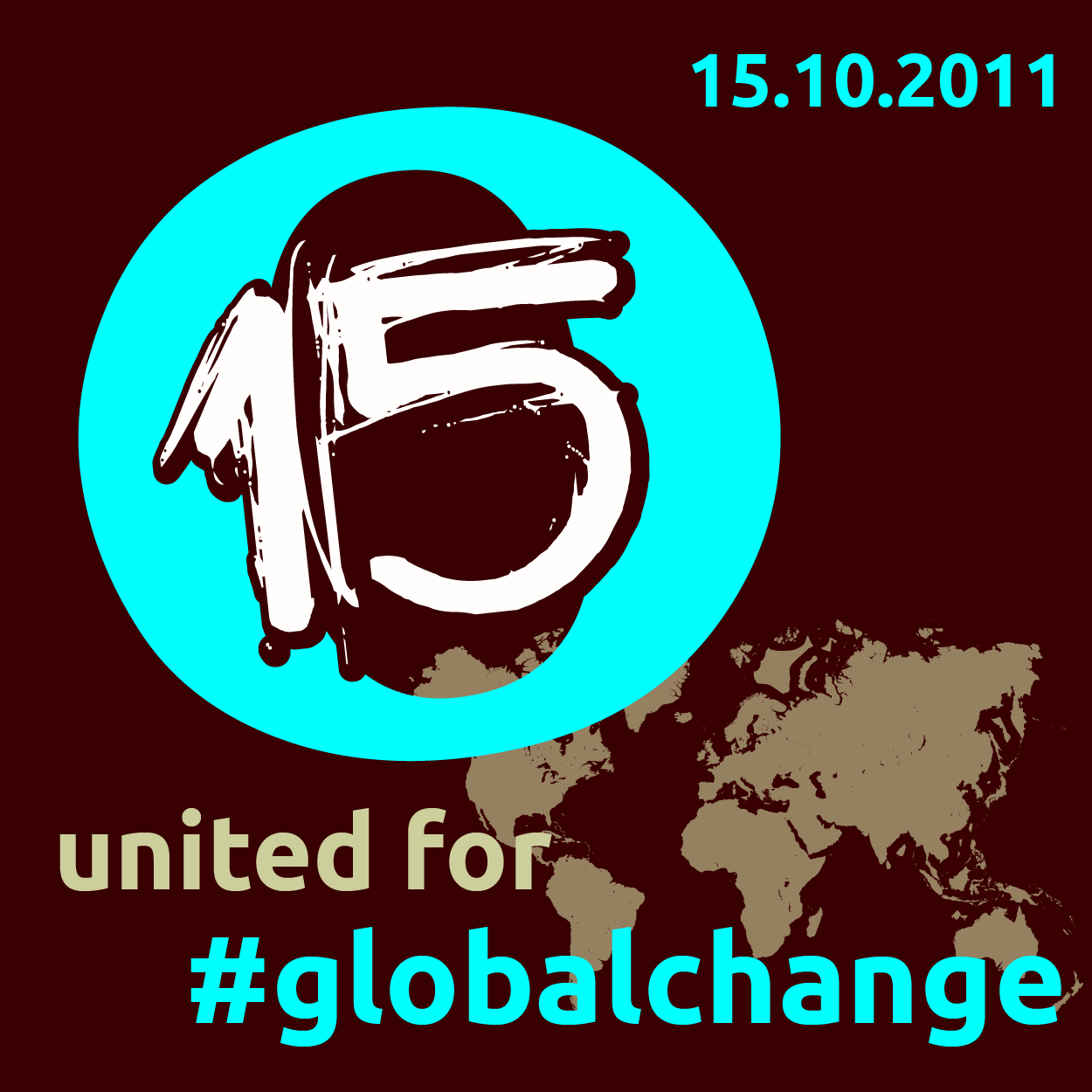 * Definition.
Looking for human dignity, we make a call to a global mobilization through specific actions, for building networks that allow the world population to decide how the world should be.

The key of 15 Oct should not be just mobilizing people, and doing some actions simultaneously, but being conscious that the world is acting together, and therefore starting to build a network between all of us, for deciding all together, because that’s the only possible way, what the world should be. We know that the powers are global, that we live in a globalized world, and therefore our answer should be global too.

* Contents.
– For giving the power to the people. For a direct democracy in a local and global level.
– Against who are deciding for us.
When thinking about the contents that could be behind a mobilization like this, the ideas that should give us a path to change the world, the first things that usually come to our minds are the common contents that usually appear in other mobilizations, activist groups or assemblies: environment (no nuclear, protecting the environment, …), banks (control the markets, tax havens, …), education (free and public education…), social care, migration, wars… but these contents depend a lot on each country’s context and its problems, the priorities change a lot from one country to another so how could we choose one or two of these ideas as the main focus of a truly global mobilization? Probably environment would be one of the contents in Europe, but for sure war or food would be the one in Africa. It’s difficult to determine global priorities.
Therefore, the idea was to change the point of view. We should go to the roots of the problems, the roots that are causing all these problems; roots that are common worldwide. And that fundamental issue that lie behind all the other problems is that we, the people of the world, are not deciding what the world should be. If we could, most of these problems would just disappear.

That’s the main idea that is behind all mobilizations in Egypt, Tunisia, Spain, Greece, Iceland, Israel, USA, … We want to decide what our countries should be, instead of dictators, markets, or governments that do not listen to the people. And once we get back the power we will find the specific answers to our problems, probably different from one country to another. That very basic, but powerful idea led us to two main contents for 15O:
– For giving the power to the people. For a direct democracy in a local and global level.
– Against who are deciding for us. And we specify:
* Financial power. The banks, global financial institutions (IMF, World Bank, WTO, OECD), rating agencies, transnationals, tax havens…
* Political power. A ruling class isolated from people
* Military power. Armies, NATO
* Media power. Big mass media, Internet censorship authorities
The whole world can feel this two ideas like their own content, and at the same time be a global answer to the global problems.

In a next level each country could develop this contents according to each local view. So we mobilize and give a global answer, but also a local answer.

* Plan for 15O.
Once we have contents for 15O, the actions planned for this day could be organized around these ideas. i.e. demonstrations in places that symbolize these powers that are deciding instead of us, or actions against any of these powers,…
Connecting with the first content and with the definition for the 15O, it’s important to keep in mind that 15O is not just a day to demonstrate but the day we start organizing ourselves to be able to decide what the world should be in a real and effective way. In some countries like Spain, Greece or Israel that is already starting to happen, but it should happen in every country of the world, and also in a global way beyond each country.

The proposal for that is to follow what these countries are already doing, and once we get into the streets organize assemblies and start talking to each other and deciding how we want to do it. Let’s build movements where each normal citizen has a voice. Let’s just sit and talk and decide in which world we want to live, and how are we going to do it.