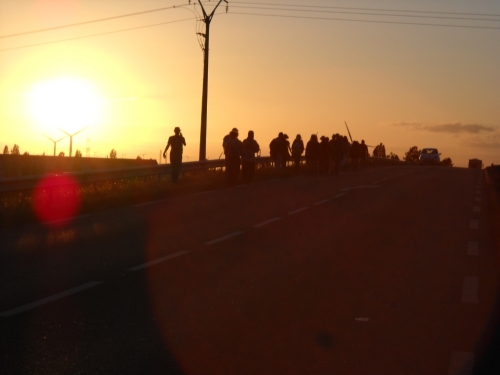 Embedded in the 15-M movement and March to Brussels from the start, Oscar ten Houten has been keeping us informed with his excellent firsthand reports.

During times of universal deceit, telling the truth becomes a revolutionary act.

If there’s one English-language source to follow on the #spanishrevolution and #marchabruselas, it’s most definitely Oscar’s Spanish Revolution blog. We are immensely grateful for the fact that Oscar has been sharing his excellent reporting with the world for the past four months, keeping us all updated on the latest developments in the heart of the movement.

What is particularly refreshing about the blog is Oscar’s candidness. While it’s clear from the start that we are reading the words of someone who has put his heart and his soul into the revolution, Oscar is not afraid of making critical side-notes about the movement, its participants and its achievements so far.

But what inspires most is Oscar’s dedication to the cause and his crystal clear representation and reflection of the movement’s positive conviction that another world is possible. We thank him immensely for the hard he’s doing, often under dire circumstances of organisational chaos, communicative lapses and wanton police repression.

The last couple of days have been particularly interesting as the indignadosended up in a number of confrontations with French riot police in Paris. Despite the protesters remaining 100 percent peaceful, French police have apparently decided to dissuade the French people from becoming inspired by the movement. In order to realize this, they have been nagging and frustrating the lawful gatherings and protests of the indignados from the very start.