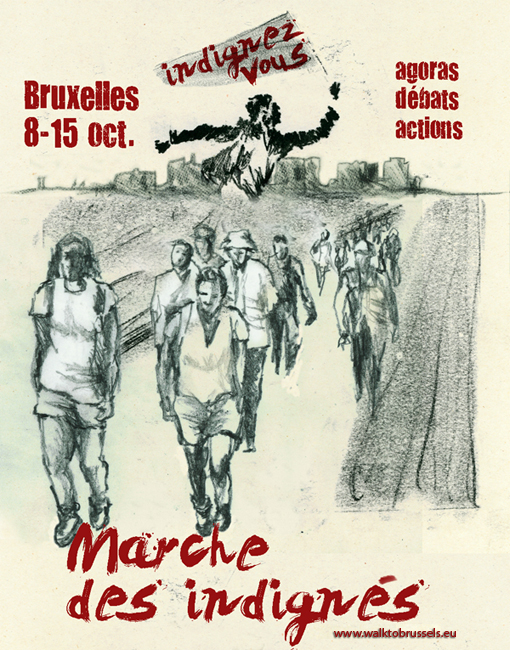 On October 8, the various marches of the movement from different countries arrive in Brussels. On the same day begins the first Global Agora of the movement to which are invited all the assemblies and people on the planet.

Marches arriving in Brussels come from Spain, France, the Netherlands, the UK and Germany. We have also confirmations of people arriving from Sahara, Switzerland, Italy, Greece, Portugal, Ireland, Iceland, Poland, Israel,Palestine, the United States, Chile, Argentina, Venezuela, Mexico and Egypt. We’re waiting for further confirmations. That same day, an event will take place on the arrival of the marches in Brussels, with the reading of a common statement of the marches and a sharing of experiences.

From October 9 to 14, there will be held thematic forums on every square of the city of Brussels, large assemblies, assemblies for children, performances, actions, workshops on software tools and assembly methodology.

On October 15 there will take place a manifestation of the global movement.

We would like to invite you to participate in welcoming the marches and in the support provided during the week in Brussels and at the Global Agora. This is where we will seek ways of global coordination and work, methods of global work to create on a horizontal base a new political, economic and social system. We need volunteers willing to come to Brussels as soon as possible to work on logistical, audiovisual, distribution, infrastructure and coordination issues. Finally, we suggest that assemblies that are coming to Brussels to welcome the marches create posters and / or signs, with the theme of the first Agora of the movement: the day when we will begin work at the global level, respecting the autonomy of all our assemblies but fighting together as a united world for social revolution.

We encourage anyone who wants to lend a hand to come to Brussels as soon as possible, and to collaborate in the work to be done.