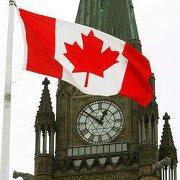 Although Vancouver’s Adbusters has been credited with providing the name and one of the catalysts for the current Occupy Wall Street movement, Canada’s attempts to initiate any reform action of its own are just now gaining attention. Copycat Occupy Wall Street type Twitter accounts and sites are springing up for most major cities, scheduling a demonstration as part of the October 15 democracy movement. These accounts have mostly appeared in the last couple weeks, and copy Occupy Wall Street’s model of concentration in major cities and no agenda outside of communication. Occupy Canada simply has a message of solidarity with the other Occupy movements.

An earlier site with a very clear agenda is Take the Square Canada, which asks for the creation of a true participatory democracy by:

The 1948 Universal Declaration of Human Rights, a 63 year old document generally agreed to be the foundation of international human rights law and many constitutions, was first drafted by Canadian John Peters Humphrey and Canada was one of the original signatories. Canadian law and policies should never deny the rights we are entitled to under the UDHR.

Take the Square Canada also has concerns with regionalization and concentration of the discussion in big cities and universities only. They are asking for other participation options to be set up here.

Another earlier site is Real Democracy Now! Canada which describes itself as a “coalition of progressive forces for real democracy in Canada” and has ties to the Spanish movement of the same name. They have a blog here. They ask:

1) THAT GOVERNMENTS PUT OUR INTERESTS BEFORE THOSE OF THE MARKETS AND THE FINANCIAL INSTITUTIONS
There are basic rights that should be met in our society, such as the right to housing, employment, healthcare and education. Governments must stop using the financial crisis as a pretext for cutting social benefits while those responsible for the crisis keep getting richer every day

2) PARTICIPATORY DEMOCRACY
In a real democracy, the government belongs to the people (demos=people ; cracia=government) But most of the political class doesn’t even listen to us. Its role should be to bring our voice to the institutions, facilitating citizens’ participation through direct channels that provide the greatest benefit to society as a whole. Their campaign promises are a contract, and if they breach it, they should be fired like anyone else.

3) CORRUPTION CONTROL
Laws against corruption should be amended and upheld so that fraudulent politicians, bankers and corporate executives cannot continue to enjoy immunity and impunity.

All the movements appear mutually supportive and with similar goals so far.