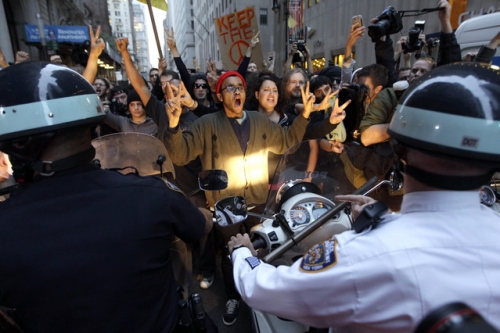 The occupation at Wall Street received good news this morning: after spending the night preparing for eviction, the clean-up order was postponed.

A spectacular piece of news reached the Wall Street occupation on Friday morning: the private owner of Zuccotti Park, which has been the homebase of the movement since the occupation began on September 17, decided to postpone a scheduled cleaning operation of the square. Protesters, who had been bracing for an NYPD-inflicted bloodbath all night, let off an ecstatic cheer upon receiving the news.

Many protesters believe the planned cleaning operation was just a ploy to kick protesters out of the park. If they had left, they would not have been allowed to return with sleeping bags and other camping gear, presumably for feigned reasons of public health and sanitation. In order to counter any claims about the camp’s hygienic situation, the protesters spent most of the night cleaning and tidying up the square.

The private owners of the park, Brookfield Properties, released a statement saying they believed an arrangement could be made with the protesters — and that they were simply too many to be safely removed. Upon hearing the news of the clear-up order, 5,000 protesters had flocked into Zuccotti Park — renamed Liberty Square by the movement — to defend it in case of eviction. All night, debates were held and instructions given on how to peacefully resist eviction.

Upon hearing the news, a small group of ecstatic protesters went on a victory lap towards Wall Street. When they failed to stay on the sidewalks, police moved in with force, deliberately escalating the situation and arresting 14 protesters. When police tried to split up the crowd using scooters, one officer ran over a legal observer — and subsequently beat up him with a nightstick and arrested the innocent and injured man. As the East Vilage reported:

The man was struck with a baton and arrested moments later as witnesses called out, “You ran over his foot” and chanted, “The whole world is watching.” One bystander hurled a bag of trash at police officers as they pushed protestors back onto the sidewalk.

The question, now, is what the next trick of authorities against the movement will be. It is clear that Mayor Bloomberg, who made a fortune selling computer systems to Wall Street, is growing increasingly antsy about the budding anti-capitalist movement at the heart of his capitalist bastion. So while the protesters may have won another battle, the fate of their war still remains undecided.