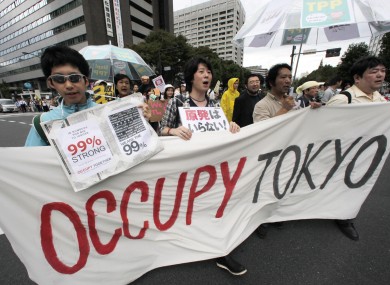 Chronic of the first hours of the 15O in Asia & Oceania
Tokyo, Seoul, Taipai, Auckland, Sydney, Hong Kong, Manila with a early wake up in the protest camp of Israel to a road trip until the Syrian border.

Occupy Protests occurred in capital cities around Australia and Asia to start this Global Day:

In Australia protests were organised in Canberra, Brisbane, Sydney, Melbourne, Adelaide and Perth, with some of these setting up occupation sites for overnight and longer. Australian Bureau of Statistics show that the divide between the rich and poor is growing with the rich getting even richer, according to this ABC report.

About 3000 people attended Occupy Sydney today. A camp was set up in Martin Place outside the Reserve Bank with people staying overnight. Just before 10pm police started massing and then moved in taking down all tents and other structures. Protestors resisted and at least one arrest occured. Occupiers have vowed to stay on.
Coverage of Day 1 in Sydney on Indymedia

The Occupy Melbourne day in Melbourne’s City Square kicked off with approximately 750 people and a large number of police. Approximately 20 tents have been set up from various groups including refugee support and campaign groups, the gay marriage campaign, an indigenous tent, kids’ spaces, and many others. An inspiring General Assembly occurred. Despite a large police presence no action against the camp was taken during the night.
Coverage of Day 1 in Melbourne on Indymedia

Between 200 and 300 people rallied in Forrest Place in Perth. Videos by @Perthtone. Keep up to date at Occupy Perth

In Manila hundreds of protesters marched on the US embassy.

More than 200 activists in Hong Kong participated in a “occupy Central” protest by gathering outside Exchange Square, in solidarity with protests in the United States and round the world. Occupy Central, HK, 2, 3, First two hours | TVB News.

A gathering in Seoul, Korea drew about 200 people to a rally outside an old palace near the City Hall, One banner read “Capitalism for one percent has failed.” Youtube Video. An earlier protest in Yeoido, the financial district of Seoul, attracted about 70 people in pouring rain outside the headquarters of the country’s financial watchdog, the Financial Supervisory Service. Youtube Video