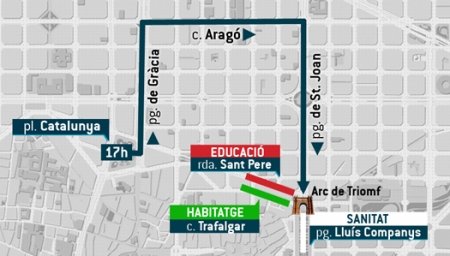 In Barcelona, during the demonstration of the “Global Day” on Saturday 15 of October where 350.000 people was processing in the streets, the manifestation was divided in three blocks:

First Block: Education
A group of teachers, students and people concerned by the fight for a free education gone to occupy an university in “Raval”.
They are still there since three nights with little people but today they organized a big assembly where they convened a general strike of Education for the 17 of November with a follow-up commission.
They don’t want to make this general strike only symbolic but as a real way of fight and pressure the government, they think to block classes until the stop of the EEES or “Plan Boloña” and some of them told about a call to all the European universities for a General Strike in indefinite time.

Second Block: Housing
The commission “Vivienda” (housing) gone to occupy a block of houses in “Nou Barris” for the families in moving situation.
They call everybody to join and sleep there where they organize a lot of activities, debates and concerts. (see the video)
Facebook and Twitter.

Third Block: Health
The “Hospital Del Mar” was occupied too because of the cut in the budget and its personnel, with a social security falling down.

Barcelona is the capital of the squatting movement with 300 squats identified last year, a strong “culture squat” and an anarchic tradition. They already squat some building during this five months of indignation and think about a national massive squatting action during the next elections advanced to the 20 of November.
DECENTRALIZED ACTION PLAN FROM THE 17 TO THE 23 OF OCTOBER