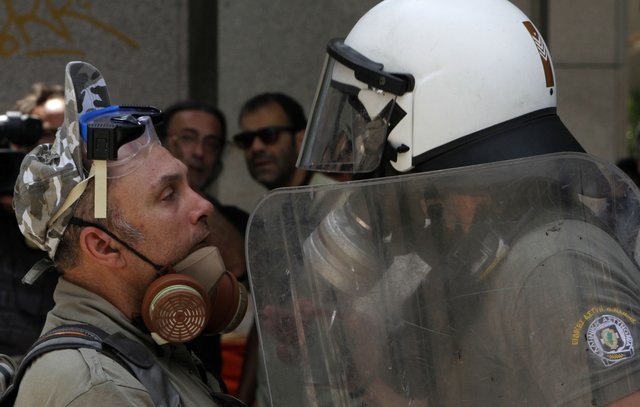 We participate to the 48 hour strike. We protest in Syntagma Square at 11:00.
Along with the workers and all of society we participate to the 48 hour strike against the bill that abolishes all labour rights.
Along with the workers being affected and the society being impoverished we react, we resist and we will not obey memorandums, troika, banks and that rotten political system.
The time has come for them to go!
We take our lives in our hands.
Direct Democracy NOW!

Greek unions said they would extend a planned general strike on 19 October to 48 hours as protests against sweeping austerity measures continued on Thursday, shutting down public transport in Athens and barring tourists from the Acropolis. With the beleaguered Socialist government of Prime Minister George Papandreou fighting to push new cuts through parliament, as demanded by international lenders, the unions said the Oct. 19 strike would be extended to the following day. The strike, which will shut down much of the country, will coincide with a vote on the austerity package on Oct. 20, three days before a European Union summit which leaders are hoping will reach a comprehensive solution to the crisis.”We want to overturn this bill which will destroy Greece and its people” said Ilias Iliopoulos, general-secretary of public sector union ADEDY, which is coordinating the strike with its private sector counterpart GSEE.

The two unions, which represent some 2.5 million members, or half the Greek workforce, have frequently been at odds over the crisis but have put aside differences for the moment to organise what is expected to be the biggest labour action in months.

The austerity bill, including savage pay and pension cuts and lay-offs in the traditionally protected public sector, passed a preliminary vote at committee stage on Thursday, despite misgivings from many in the ruling PASOK party.

“I have no intention of voting against the bill, but no one can stop me criticising it” said PASOK deputy Leonidas Grigorakos. “What is taking place has no precedent, society is in turmoil, there is huge insecurity. We politicians must say where the country is heading.”

On Thursday, Athens public transport was halted, the Acropolis, symbol of Greece, was closed to tourists for a second day and protesters ranging from Finance Ministry officials to cancer patients demonstrated against the cuts.

Protesters also occupied the printing offices of Greek power utility PPC , to try to disrupt a deeply unpopular property tax which will be collected through electricity bills. The national TV started the strike on Saturday 15 and the garbage trucks are in strike since three weeks now.