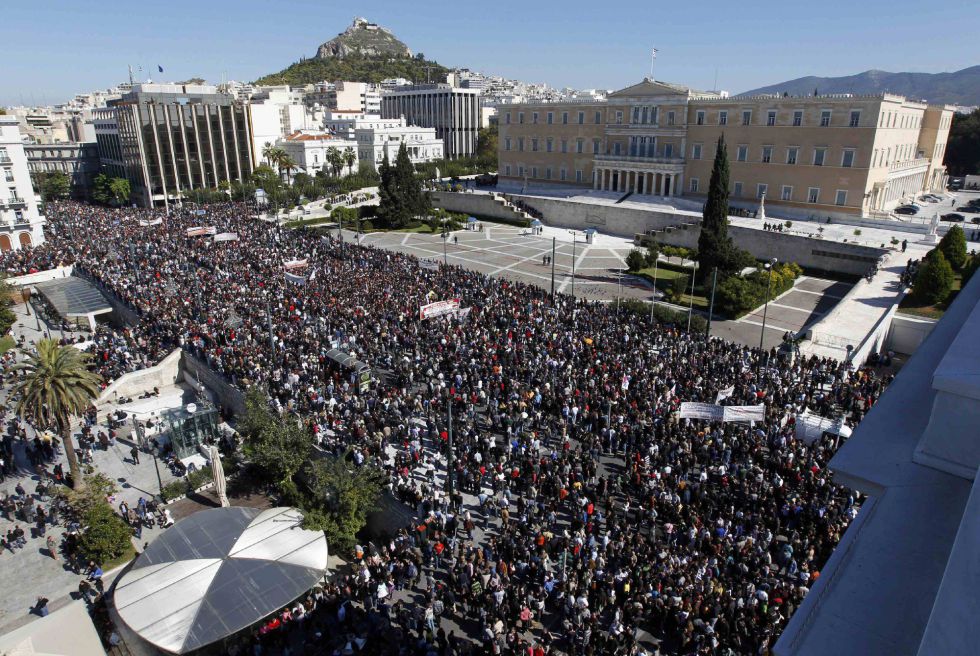 My day started in the streets of “Exarkia”, the famous anarchist neighbourhood of Athens where I was directly at the top of the manifestation.
At 10H30, “Patission” Street was full of people and my friends from “Alpha Kappa”, a strong collective situated between anarchists and radical left, told me that they never seen so much people at this hour in the classics demonstrations. When normally the groups are preparing the banners, this morning all the processions was ready to go, all the worker unions, the student delegations, the collectives and associations, the political parties, the anarchists groups, and the communists who start generally at 10H to be separated of the common people… Video I gone to take a coffee and leave my computer in a house of a friend close to this street and I directly crossed a struggle between the police and some black blocks shaped for this big day of general indignation, throwing stones and burning the mountain of garbage due to the three weeks of cleanliness service strike.
I came back with a friend who translated me all the banners and speeches during we crossed all the demonstration until Syntagma square.
The three principals roads to go there was full and we took one hour to join the square, my friend also told me that she never seen that before and that the speeches of the people was very angry.

In Syntagma who was totally filled as all the streets around, I easily met my comrades from the Media Centre at the place where they make the General Assembly. They left quickly to go looking for a place in order to install one of the several “secret points”, this secret places where the Web Team and the video-makers are working between the “runners” go finding the cameramen in the crowd to provide them empty memory cards and back up the full ones. Others was organizing the new Channel of Syntagma Square who will follow in live this 48H of strike. At the sound of the first big explosions everybody was applauding, I’ve seen some cloud of black smoke coming out of the parliament area and I putted my mask to go upstairs.
There I took part of my biggest black block battle, so much violence against the police like I never seen before, also if my friends said that for Athens it was not so tensed, I also never seen 1.000.000 people outraged in the street… I say violence against the police because here in Greece, the people attack traditionally the police before the police charges. They want to “demonstrate” that they are not afraid, that they are determined and they need this kind of spectacle to feel them proud and strong, when the government humiliate them everyday, as some friend told me. Video 1 2 The police stayed very quiet because of tomorrow, the biggest day of  strike against the vote on the austerity package, so we through a lot of stones, bottles and fruits, destroying all the parliament square and Syntagma to make more stones. It was raining stones in non-stop during may be 5 hours when other was shooting molotovs, sometime with dynamite, smoke bombsn paint balls and mini rockets. It was hard to be in the side of the “winners” today. I hope that with this big explosion of rage they will find it difficult to sleep well and think twice before to protect a dictatorship and the pillage of the Greek population… just for 800€ per month! I understood that they were also a lot of riots and fire in the street down to Syntagma square, I put here some photos but I will relate just what I’ve seen.
After a big charge by the police tired to eat stones and fire, a lot of black blocks left the place so some pacifists made the negotiation between the police and the outraged to stop the violence during the police return to his position, in front of the parliament. They was still there when I left Syntagma but with less people so the police make use of this disequilibrium to start more charges and evict more areas, until Syntagma square, downstairs in the “indignant” zone. Coming back to the house of my friends I seen all the centre crashed and burned, the motorcycles, the kiosks, the bus stations, the shops, the surveillance cameras, a big part of the centre was destroyed. They made this during we was in front of the parliament, in the first line with all the cameras.
The street was full of smoke with everybody crying and coughing because of the gas, they was also full of cops who was recuperating slowly the city, so I was walking quickly and close to some unknown groups because this time is generally the time when they recognize you and catch you alone.
On my road I met a lot of people sited down in circle making small assemblies, also in the metro, the direct democracy is something won in Athens. The strike continue during the night and like most of the time in Exarkia. When I made a road to Syntagma this night to go to the house I sleep, it was still hard to breathe, the cleaning service was equipped with mask and I was crying until under my shower. This type of gas stay three days on your clothes and you have to clean yourself entirely to sleep good. Tomorrow is the big day when this was just an exercise, the communists plan to surround the parliament early in the morning where the vote will take place, it’s very rare that the communists are active so it can be really great to see this action because they are hundreds thousand just in their processions. The last time they acted was for the coming of Bill Clinton in 1999 when they tried to pass a police barrage to march to the U.S. Embassy.
I can imagine that the black blocks and the insurrectionist movements reserve a lot of surprises when I see what they did today.
For the demonstration I don’t know how they can be more than today, Greece was united and for sure they listen this recently called “Mother of all strikes”. From ontheroadoperation.net