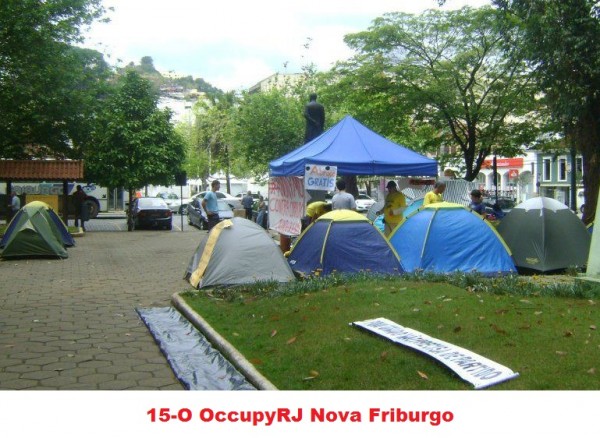 The Saturday, October 15th was rainy and windy in most of southeastern Brazil.

Nova Friburgo was the first city to camp in Brazil, located in the mountain region of Rio de Janeiro. The camp was at the Getulio Vargas Square but sadly a rain storm surprised the activists who had invaded their tents by the flood.

Rio das Ostras is located on the coast of Rio de Janeiro. The camp was in Central Square, they performed the assembly and held a broadcast. They suffered police repression and was forced to dismantle the camp. The activists left the tent after heavy rain. Rio de Janeiro set up the camp in Copacabana beach (#AcampaRio). The crackdown came only by the metropolitan guard who asked them to take the Anonymous flag of the trees. On sunday the activists made posters and distributed flyers to the people. They occupied the site for more than 24 hours.

Niteroi held a rally, activistas made posters and distributed flyers. The protesters also organized a march through the streets near the beach.