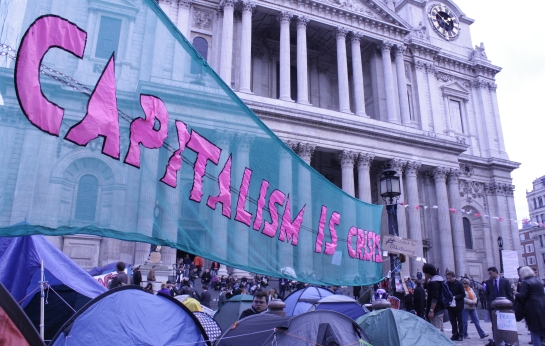 Occupy London Stock Exchange sets up camp in the City

Over 250 people camped overnight in the area near St Paul’s cathedral, one of London’s most iconic land marks as part of ‘Occupy London Stock Exchange’ (OccupyLSX) which began yesterday (15th October). The overnight occupation followed on from a day which saw between 4000 – 5000 people gathered in London’s Square Mile, voicing their anger at the social and economic inequality in the UK and around the world; and their lack of control over the decisions shaping their lives.   As part of a global day of action [1], with 19 other actions being held in the UK, [2] OccupyLSX held its first People’s Assembly – open to all – allowing attendees to voice their opinions, take decisions and to discuss real democracy and inequality caused by an unjust economic system. The next People’s Assembly is to be held at 12noon today.

People occupied the area outside St Paul’s cathedral from just after 12pm on Saturday 15th after the police blocked entry into their intended location of Paternoster Square. Police later used force to clear the steps of St Paul’s cathedral in the early evening, despite calls from occupiers saying that police actions were intimidating and disproportionate. Anna Jones, a supporter of Occupy London Stock Exchange said: “We have seen people kettled, grabbed and thrown off the steps forcefully by the police. This was entirely unnecessary. No-one came here to have a fight with the police. The only crime that the police can pin on people is one of having a conversation about real democracy and the unfair and unequal economic system that favours the rich and powerful.”

After what returned to a calm and engaged night at the camp, with music and workhops ongoing, Canon Giles Fraser of St Paul’s emerged from the cathedral earlier this morning, before the service (16.10.11) to address the crowds of people who had stayed overnight.  He defended the right to protest saying: “People have a right to protest and I’m very happy that people have that right to protest. People have generally been respectful and I have asked the police to leave, they are going to be doing so in a second. It seems to me that all is well and calm”. “I’ve seen what is going on and it seems to be that there doesn’t need police force in the numbers that there have been, so I have asked them to move and they have done. All is well and there is a very calm atmosphere”

Canon Giles Fraser also commented to an occupier that although he was not at St Paul’s last night, he had asked the police to leave, but that they had refused to do. Canon Fraser then invited occupiers to the morning service at St Paul’s. Andy Rogers, an occupier said: “We’ve now been welcomed by St Paul’s which is brilliant and we really want to extend that invitation to everyone at home. We are here to talk about the role that the financial sector, government and corporate greed have in ruining the lives of ordinary people and how we can bring about change, as you can see here, by working together, we can make a difference”

People from OccupyLSX are in dialogue with Canon Fraser to ensure that everything runs as smoothly as possible for worshippers at the cathedral and their new neighbours.

NOTES [1] Bringing together a diverse range of people, OccupyLSX is part of 20 actions and occupations happening in towns and cities across the UK and over 950 actions worldwide who are coming together under the banner of “United For Global Change” calling for true democracy. OccupyLSX is supported by groups including UK Uncut, the London-based Assembly of the Spanish 15M movement and others. It has already received phenomenal interest, from the public and media in the UK and around the world, with the OccupyLSX facebook group now having more than 15,000 members. [2] For more info on UK occupations please see:http://www.occupybritain.co.uk/protest-details/