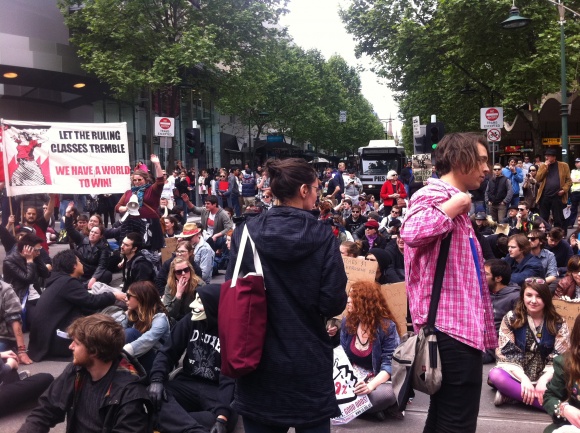 Overview given of purpose of General Assemblies. Aimed to work on consensus model, having one General Assembly each day at 4PM Weekends, 6 PM weekdays

1.Working Group Report Backs/Information Sharing
If anyone wants to get involved in a working group – please go to the information desk and sign up. Involvement of all is encouraged. The purpose of working groups is to facilitate the self-organisation of the occupy camp.

Legal support working group.
Here to give support and advice to people and provide solidarity where necessary. Take care of yourself and others. Know your rights, include right to a lawyer. Highly recommend that you give ‘no comment’ interviews. Remember the square is under surveillance. Go to a community legal service if you are a victim of police violence. The protesting is not itself illegal but structures may be. Police have said they will give fair notice of eviction but if the time comes it is up to individuals to make an informed decision. Get the number of legal team.

First Aid working group
First aid is part of us looking after each other. The first aid team are made of people with first aid certificates. If you are qualified and want to help out – speak to someone in a yellow vest.

Logistics Working Group
Role of logistics is to look after material welfare of occupation. They have blue arm bands. Hoping to have power by tomorrow. Overflow for when we are full in the square is the Treasury Gardens!

Indigenous working group
There is an indigenous tent. Make sure you think about how all actions will affect indigenous people and take this tent as an opportunity to learn

Community Outreach group
Reaching out to unions and other protests. Leafletted a few community events. Letters have been written that have been addressed to union and rank and file unionist. Also reaching out to campaigns such as refugee campaign.

Environmental impact group
Need to keep this a clean area. Pick up butts, not smoking around children etc.  These are out streets: keep em clean!

Direct action working group
There to get people ”out there” involved but also to get the camp “out there”. Get involved to make this campaign make a mark on this city.

Parents and children committee
“Welcome kids”!!!!! People of all ages having something to learn and give. Carers also have a role in this movement.  A tent is provided next to the big baby – it is NOT a child care facility. Parents need to be with them ALL the time.. They have a PA and can make a call out for loss children. Write your phone number on your childs arms. Also have a Facebook group “Kids and parents of Occupy Melbourne.” – please join.  Arts and toys needed – need people to help out.

Media
Been uploading photos to Flkr, features on Indymedia, Skype connections with other cities occupations.

Meeting at 11am tomorrow.  Press release will be drafted by this group; to be approved by the GA to go out

Facilitation
Working on consensus models. Shout out to  process of human microphone used by Occupy Wall Street – well done!  Not needed right now.   Might need at a later time.

Parents and Kids/Children & Carers working group:
That occupy Melbourne commits to making every effort to be a compassionate space that welcomes people of all ages and abilities.   We believe that children are an integral part of our society.  Children and carers should be treated with respect and patience and their rights to contribute and organise and their rights to contribute recognised.  All participants in Occupy Melbourne need to be proactive to facilitate the involvement of carers and children and be mindful of their needs.

Occupy Melbourne makes a commitment to do our best to make this place a child friendly and safe environment to ensure that there is a clear line of communication between police liaison and participants, including carers and children, so that people have the best information and support ot keep kids safe.
Result: endorsed

Community Outreach:
To organise and build a march next Saturday from City Square through the city to the financial district.
Result: request for working group to put a more detailed proposal to tomorrow’s meeting.

Demands:
We celebrate the death of the Malaysia deal
We  demand an end to mandatory detention and all discrimination against refugees.
We want to say that refugees are welcome here
Result: endorsed

3.         Other Proposals
That there are set times for people to go out to do postering and public discussion.
Result: that this be referred to the community outreach working group

That  homeless people are welcome at occupy Melbourne and have access to any of our resources.
Result: endorsed.

That this action is endorsed as a nonviolent action; and that we take communal responsibility to reinforce this.
Result: endorsed

That we support a general minimal tax of 1% richest.
Result: set up group to work on this.

If anyone wants to do Flashmob promotion, to contact Tina via the website/facebook.

To call anyone with design skills to with design with longevity not marketability.
Result: take to speakers forum.
Melbourne is occupied territory.  Australia is stolen land.  Sovereignty was never ceded. We have come together to occupy Melbourne.  We cannot ignore that we do so in the context of another occupation: the violent colonisation of this continent.  We are here because we want a genuine democracy, a humane economy, justice.  We cannot achieve these goals while the crimes of colonisation continue.  An end to colonial activity is central to our aims.  A racist society has socialised us all into racism.  We will strive to recognise and respond to racist behaviours in our occupation of Melbourne and we invite criticism of our actions; we want to be better.
Result: endorsed.

That in Occupy Melbourne the 1% not be vilified.  That instead we bring the 1% into the 99% .  We acknowledge that they are causing problems.
Result: range or perspectives for and against.  Referred to a discussion group tomorrow.

This general assembly declares that we are in solidarity with the workers of Qantas.  Also suggestion to feed back a possible visit to direct action working group.
Result: endorsed\

This general assembly declares that we are in solidarity with the workers of Philippine Airline workers fighting against out outsourcing.
Result: endorsed

That Occupy Melbourne has a ‘no buying; no selling’ policy’.
Result: consensus not achieved.  Referred back to individual.

Rather than use loudspeaer, we use human microphone in future Gas
Result: no consensus, bring back to next assembly.

Solidarity with the police union for their pay claim.
Result: Consensus not clear, referred to next meeting.

Open lines of communication with elected representatives at local, state and federal levels to enlist them to the movement.
Result: form a working group to explore this proposal.