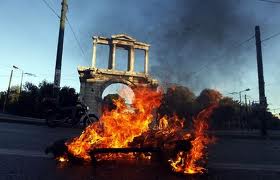 One more time the centre was full of people, parties, worker unions and collectives, the Greek was united and the ambient was more relax because today the strong communist party was making the security.
Their “plan” was to surround the parliament and the only presence of his thousand hundreds followers made the action. When I talk about a security service I’m not in the metaphor, they protect the clan and are very serious, with their big sticks and their casks they really looks like cops. Yesterday I wanted to cross their procession to go reach Syntagma square and their human cord blocked me and ask me to take another way. I missed my card of the club.
All the square was also surrounded but by the big megaphones of the Party screaming the single “Voice”, everybody had to know that the communists was on strike, that the communist WAS the strike maybe and we were assisting at their traditional big propaganda worthy of the first communist party in Europe. The problem is that violent anarchist groups, who are just some parts of the big anarchist movement in Athens, wanted their second day of riot and had certainly their own “plans”, smallest, multiples, but agile in opposition to this giant too heavy to move. Of course they were waiting that the crowd of communists leave the square of the parliament to start the second round, the “reds” are may be too heavy but they are strongest and organized as a real army with a lot of soldiers ready to obey at the same order.
After twelve, 1pm, 2pm they were still there, around the parliament, so it happened what had to happen, and it was horrible just to imagine.
I was down the square in an interesting conversation with a sympathetic unknown about the Greek movement when I heard the first explosion witch broke directly the festive atmosphere because everybody quickly understood what was happening. video
I don’t know who start the fight, some people say that it was planned by the new chef of the police, but running directly upstairs on the crowd, in direction of the explosion, what I seen should not be possible. Communists were hitting everything that was not red, bombs was surely coming from the “anarchists” (what kind of anarchist can throw bombs on civilians?) and it was raining stones on the common people present there, just terrible.
Promptly the first wounded were carried out to the doctors team, generally unconscious with the head exploded and bloody, and the people organized big corridors from the battle area to the medical centre. The panic was readable on the face of the people and I felt the fear for the first time in years.
I found a pull-over on the ground, I putted it on my head and I continue until the area between the both side of war where a courageous guy was screaming them to give up the fight, at the risk of his life.
After a small break permitting to the communists to reform their block, the stone throwing restart from part to the anarchists and it looked like this images from the Egytian revolution between the revolutionary and the pro-Mubarak, a real disaster. They also through fire extinguisher and metallic plates during all the police staff was enjoying the spectacle without doing anything. video
The communists who played the role of gendarmes during all the day started a strong charge and all the anarchists ran in the other side when others like me jumped down from the street to the square as we could. We found shelter under the terrace bar so we couldn’t see what happened upstairs but we heard all the explosions, stone stokes and screams just under our heads, it was very scary. Next to me a girl was hurt at the floor and in front of the terrace some doctor was treating another person, protecting themselves with a big destroyed door. I decided to leave the shed, running the faster I could to join the pacific centre of the square and recover my computer in the media centre. video
I was looking at the fight from behind with the technical support when the police took advantage of the situation to evict the square with tires gas and violent charges. We were too many people completely compressed in this general panic to leave the square and evict the chemical clouds. Walking upstairs I was paralysed by the gas and everybody was crying around me. There is always people who spray you with some Propane and that made me remember the non-violent resistance in Barcelona where people spray you with some water because you stay without moving under the sun.
I went to sit on the stairs and relax a little bit while the communist soldiers, returning from their struggle in their initial position were welcomed by a lot of applauses from part of their comrades. video
Few policemen were in the square surrounded by the people they couldn’t evict so begun the moment I prefer in this tensed confrontations, when the people have the power of the number and they start to talk with the police. Generally more dangerous than stones it’s words I throw at the head of this pigs, I can do it in a lot of countries but in Greece it’s something I cannot. It looked like the interventions were funny and I enjoyed to look at their expressions, from both sides. I focused also in the attentive eyes of a “kids”, a mini-crest-punk of maybe eight years old as you can see a lot in the streets of Athens. What a school for him! His parents was not here, I imagine that they are more fucked up then him, no school, I hope it was because of the strike, and all this quotidian violence in a country totally destroyed, what kind of future that can procure… video
That took some time and the police was disoriented, the orders were not clear and the situation not comfortable, they were maybe thirty down to the square when we were thousands. But at one moment they started to arrange in position and pushed us slowly down to the square. It was ridiculous and not really understandable because we were more but first of all we were pacific so the people refused to move and the police throw gas directly in our face and charge with more violence, evicting totally the square of the indignants. It looked like the order was to evict the square. I was now in the streets down to Syntagma and quasi all the workers union was gone, only black blocks groups who was there since the communist charge was destroying everything as they used to do. The riot they were waiting for was exploding in a lot of streets full of smoke with more fire than I’ve seen before. All the public infrastructures but also some private banks was crashed and burned and some squadron of police was fighting with them. I decided to calm down and I met a very nice anarco-reporter from Torino so we started a big conversation sitting on the floor in the middle of the street, with my two big bags, smoking cigarettes and eating some apples inside this little Genova.
Surrealist image like this Pakistanis wandering in this civil war pushing their shopping cart to sell masks, glasses, water or little speakers.
After this big break the night was falling, we started to heard some explosions and screams from the square so we gone to see but the police stopped us, we also made a big road in the streets of the centre, taking photos and talking with the people. The landscape was chaotic and the story we heard maybe worst.
Today Dimitris Kotsaridis a protester, 53 years old, member of PAME (syndicate of the Communist Party), died from heartattack after the tear – gasses. The guy who told us this info was a friend of danielo, the Italian activist. He was laughing and said that today the European police protected the parliament, a joke between the rumours of the EGF presence in Athens for this two days of strike, and the “plan” of the communist who was, according to his statements, a pretext to protect the parliament from the black blocks attacks and monopolise the event, so a cop has to know that he can die during his service…
After this tasteless joke the police started to send us gas and to charge in our direction, they was apparently evicting all the avenues around Syntagma.
I found miraculously my friends in this agitation and we made a big detour to come back to the square. There the police was surrounding the place so my friend made a break and I left him quickly to see some fights in a street close to here. Enlisted in other riots I’ve never see him again.
The black blocks was at the level of the University in Panipistimiou destroying and burning things and there was fire in all the street around. I stayed with them until the cops came to evict the avenue until Omonia. After this some of them continued until Exarkia but I came back to Syntagma where unfortunately my friend was gone but an other friend from the International commission came to talk with me. He was behind the cops in the square and I was out, nobody could exit or enter in Syntagma according to the orders and the situation was very ridiculous. So we start to talk with them, especially my patriot friend who was angry against his twenty years old cousin who entered in the police recently. I didn’t understood all what they said but the cops was listening attentively. During all the day I’ve seen them very tired with depressed faces, this 48 hours of strike started to be long and I don’t think that a lot of cops defended corrupted political systems in front of 1.000.000 people, it have to be very disturbing especially when they are shouting insults from the children to the old people. But the real looser of the day was the Greek who fought each other during the package measures was approved by the parliament…
Next round November 17 for the anniversary of Athens Polytechnic uprising