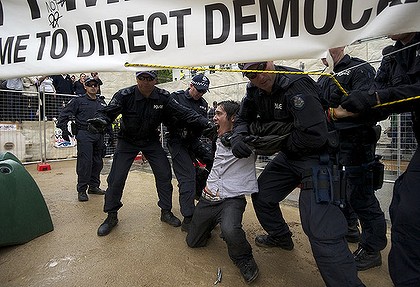 This article contains content that was orginally published  by indymedia melbourne.

After six days of peaceful occupation of the Melbourne city square in Australia, Lord Mayor Robert Doyle warned that if the protestors didn’t leave today they would be forcibly removed. The eviction was carried out by 400 police including riot police and dogs. Horses and capsicum spray were also used to attack the crowd at various times.

The police moved in shortly after 9am, and with the help of council workers and private security guards corralled everyone in with fences, even refusing to let in the legal support coordinator.

By 11am, after several arrests including some with injuries, the police dragged a solidarity protest off Swanston St when they occupied the street. Meanwhile the council workers and cleaners cleared the square of tents, cooking equipment, and everything else except some one to two hundred protesters (hemmed in by a cordon of riot police) who locked arms and chanted throughout their hours long ordeal.

At noon the square was clear except for police and protesters. There was a huge police presence along the streets, with hundreds of shocked onlookers separated from the City Square by a double-fence barricade, and horses aggressively keeping people off the street.

Then the last of the protestors were dragged and hauled from the square, often thrown into the waiting crowd.

Within minutes hundreds of people had occupied the intersection of Collins and Swanston St and after approximately an hour police horses charged through the crowd and police forced everyone away from the intersection, arresting some and shoving many bystanders and supporters out the way – effectively occupying the intersection themselves.

More advances by police had moved the crowd further up Swanston St by 2pm.

At 6PM Hundreds of people from Occupy Melboure reassembled for a General Assembly at Trades Hall in Carlton. The meeting agreed to meet on Saturday 12PM on Federation Square.

The Legal Support Team has recieved many disturbing accounts of police brutality throughout the day including capsicum spray being used on juveniles, peopled kicked in the groin, charging police horses into crowds, people punched in the face, racial and homophobic taunting and an elderly woman being knocked over by a line of police. At least 62 people were arrested but possibly up to 100 were arrested during the police attack. Most were released without charge although some have been charged with Breach of the peace. As of 10 PM on Fridy night, it was believed that 5 people may still be in custody on unkown charges. Statement by Legal Support Team

Inspired by occupations in Wall st and around the world, Occupy Melbourne was launched on Saturday October the 15th. The message of this global movement is simple; we are sick and tired of the disproportionate wealth, power and influence enjoyed by the top 1% of our society. We are students, workers, unemployed, and homeless, and we want our voices heard for once, and by occupying City Square (cnr Swanston/Collins) we hoped to… build a movement of ordinary people to change our world for the better.

Since Saturday thousands of people have participated; in the general assemblies, the direct actions, the not-for-profit food kitchen, and more. Over a hundred people have gone one step further and occupied the square every night, maintaining a visible and peaceful presence at all times.

Yet today, Friday the 21st of October, we were attacked, evicted by the Victorian Police at the behest of the Melbourne City Council. Approximately 60 people were arrested, with one aboriginal man hospitalised, one man tasered twice, and most of our property stolen and sent to landfill. Needless to say, our demonstration remained peaceful the entire time, and no police were injured (unless their knuckles were bruised on people’s faces).

The reasons given to the media for all of this were extremely spurious, and very few protesters were informed at the time of the eviction. We can only assume that the real reason we were attacked is for committing the crime of standing up for the voiceless, for demanding real change, and challenging the ruling 1% in this society.

We responded by organising a massive show of solidarity throughout the day, with over a thousand demonstrators marching through the city despite being Tasered, pepper-sprayed and hospitalised by police brutality.

Yet we cannot stop there. We need to come back, show that we cannot be removed so easily, that the streets of melbourne are ours and that we will fight for them. So please, everyone, come back and show your determination and support for the Occupy Movement by coming to Fed Square tomorrow at 12 midday.