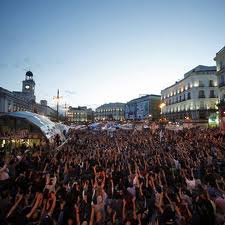 The People United Will Never Be Defeated!
United we can achieve the impossible, everything can be!

A united people can say “No!”, can say “We won’t pay!”
Can resist to the State and the banksters hidden behind.

A united people can live in utopia, practice self management,
He can become self-sufficient and savor his freedom.

As opposed to the people’s union necessary to the change
There is the concept of political party stifling the hope of a real change.

This fascist utopia that one “leader” should govern a whole people,
Who have as main goal those to convince everyone it holds the truth
Trying to make everyone think the same, or not thinking at all out of its dogma.

In the fascist obsession of power without which he cannot do anything,
Where all methods are possibles, the end justifying the means,
To reach the top of a hierarchical system he wants to control.

The Party manipulates and divides people who fight them each other
Instead of fighting together against this political elites.
Contaminated by this competing dogmas man defend its own ideology
Rather than seeking common point he has with his fellow citizens.
This individualist attitude, this imperialist complex of superiority,
Promotes the dictatorship of a majority on a losing minority
When only the popular consensus can make us see the top of he mountain.

Our popular movement is not a movement of ideologies but of Methodologies
We will never have all the same ideology, convince everyone to think like us
Is an endless war who will condemn the society to a slow and painful death.

But participate together in the assemblies proves that we have a first common:
The common desire to decide together and horizontally about our lives,
Coordinating massive actions to fight the system,
And building alternatives made by the people and for the people.
That doesn’t mean that we have to forget our political backgrounds
But that we must adopt an open attitude to converge in inclusive solutions.