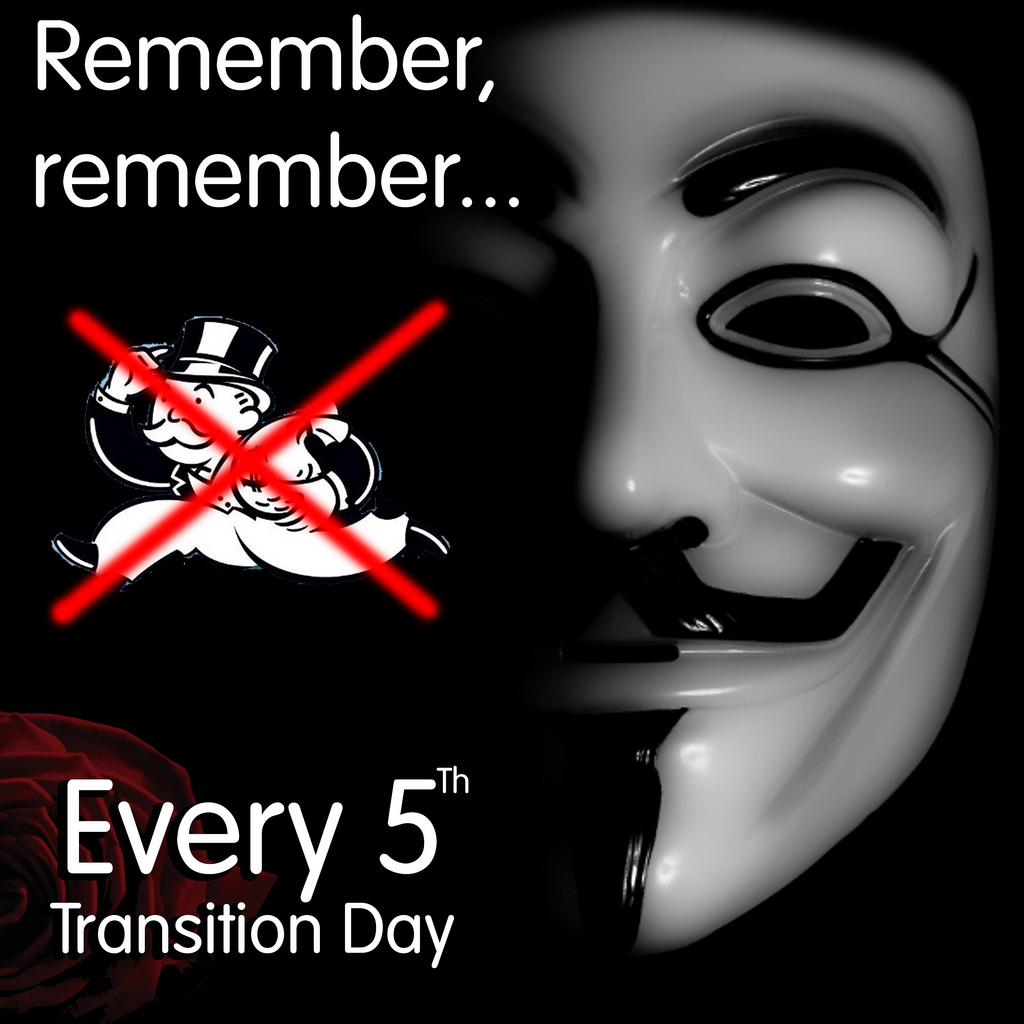 The 5th. of NoVember will be signed with a V as Vendetta,
After an amazing Global day on October 15 where hundreds of cities started their first assemblies, emerged this last days a Global Week for the Financial Alternatives.
Alright you redeemers, rebels and radicals out there. We take from the rich and give to the poor. Its now time to amp up the edgy theatrics … deviant pranks, subversive performances and playful hijacks of all kinds. Open your insurrectionary imagination. Anything, from a bottom-up transformation of the global economy to changing the way we eat, the way we get around, the way we live, love and communicate … be the spark that sustains a global revolution of everyday life!
Starting with an International march on October 29 for the RobinWoodTax called by Adbusters.org, the famous collective who called for the operation occupy wall street and started the successful jam for occupy all the stock markets around the world the same day.
On the eve of the G20 Leaders Summit in France, let’s the people of the world rise up and demand that our G20 leaders immediately impose a 1% #ROBINHOOD tax on all financial transactions and currency trades. Let’s send them a clear message: We want you to slow down some of that $1.3-trillion easy money that’s sloshing around the global casino each day – enough cash to fund every social program and environmental initiative in the world. Take this idea to your local general assembly and join your comrades in the streets on October 29.
From the 1st to the 4th of November a camp will be established face to the G20 in Nice, and ready to welcome hundreds of indignants from all around the world for a big international march the 1st, with demonstration in the center of Nice, rally and concert, and during the next days a lot of actions (like on Thursday 3 against tax havens in Monaco and all around the world) and a People’s forum under the slogan”People First, Not Finance” supported by Dakar world social forum.
The Program of this meeting was built around six themes:

1. Stop austerity, end inequalities (austerity, employment, social rights, welfare, debt)
2. The people, not the market (finance regulation and debt)
3. Change the system, not the planet (environment, development)
4. Don’t gamble with our food (agriculture, food)
5. Indignados, Rebels, Solidarity (democracy, struggle in Mediterranean region, human rights)
6. They’re 20, we’re billions (global governance)
You can find more information in mobilisationsg8g20.org or contacting contactg8g20@altermob.org and for the housing here.
After Madrid, Paris and Brussels, the braves indignants walkers who are now a coloured mix of all Europe will be there to share their stories and experiences before to start the 5th. from Nice their next adventure: the Walk to Rome/Ithaca/Athens after an International meeting of the People assemblies movement.

This same day the British outraged who are crossing all the country since three weeks now in a big March to London will join in the capital to prepare a big action in commemoration of the failed assassination attempt against King James I of England and VI of Scotland by a group of provincial English Catholics led by Robert Catesby. They was planning to blow up the House of Lords during the State Opening of England’s Parliament on 5 November 1605, as the prelude to a popular revolt in the Midlands.
Other cities support this symbolic day and work on a new anti-banks day like in Cologne, Athens, New York, Köln, Berlin, Paris where the assembly decided to occupy la Defense, the major business district, or in Brussels where they prepare a forum against the financial dictatorship.
Finally that day, a lot of people will initiate a new type of recurring action that the financial elites are not ready to forget…

After the two announces of BTD (Bank Transfer Day followed by more than 60.000 people) and Anonymous, inviting people to transfer their money from the banksters to credit unions on November 5, we will study the proposition in the next general assemblies of Madrid, London, Athens, Milan, Lisbon, Paris when the assemblies of Brussels and Milwaukee have already approved this action and are working on it.
So today we invite all of you to introduce this call in your General assemblies in order to give, all together, the 5th. of November, the last kick to this financial system.

The proposal is to start an international campaign of information, according to this period of Global awareness, inviting everybody to take their money out of the commercials banks and pass it to ethic banks (bank account) and credit unions (savings).
So  this action will have two fronts: take  the money out from the banksters elites, but also put more money available for sustainable projects who will contribute to everybody and help to heal the world.
People  can do it without changing  anything on the way they use their money (debt cards, etc) and they will have a bank account that will not  contribute to war and exploitation.
What is the plan?
• Research your local credit unions or ethic banks options (you have until the 5th. of November and we will share a maximum of informations and contacts to help you)
• Open an account with the one that best suits your needs (before the 5th. of November because it will be a Saturday and some of them will be closed)
• Cancel all automatic withdrawals & deposits (before the 5th. of November for more success)
• Transfer your funds to the new account (during the 5th. of November, the morning they are all open)
• Follow your bank’s procedures in your personal documents to close your account before the 5th. of November.
Find a credit union (will be updated everyday) :
USA: http://www.findacreditunion.com/
CANADA: http://locator.cucentral.com/
UK: http://www.findyourcreditunion.co.uk/  http://www.reciprocalbank.org/
SPAIN: http://www.unacc.com/defcajas.html
FRANCE: http://www.credit-cooperatif.coop/   http://www.lanef.com/
FINLAND: http://www.jak.se/international/international
BELGIUM: http://www.rentevrij.be/
ITALY: http://www.jakitalia.it/
SPAIN: http://www.coop57.coop/index.php?option=com_frontpage&Itemid=1
GERMANY: OZB_Blick_-_December_2008.pdf   http://www.gls.de/
http://www.umweltbank.de/   http://www.ethikbank.de/

Follow-up:
Together we can ensure that these banking institutions will ALWAYS remember the 5th of November!!
If the 99% removes our funds from the major banking institutions to non-profit credit unions and ethic banks on or by this date, we will send a clear message to the 1% that human reached a new level of conscience, the conscious consumers won’t support companies with unethical business practices.
But  we can go further, the 5th. is one of the best days to have the most impact on the market and the banking accounting, so if we succeed the 5th. of November why don’t repeat this same action every 5th., trying to break the record every time. The people will get used to it and we will use the same  campaign of comunication so it will be very easy to do it again and better.
More informations:
Transitiondaycontact@gmail.com
http://facebook.com/nov.fifth
http://www.facebook.com/profile.php?id=100003081613424&sk=wall
https://n-1.cc/pg/groups/475371/5th-of-november-transition-day/
http://piratepad.net/propuesta-finanzaetica
http://opcashback.wordpress.com/2011/10/16/why/
Transitionday.net (soon in service)